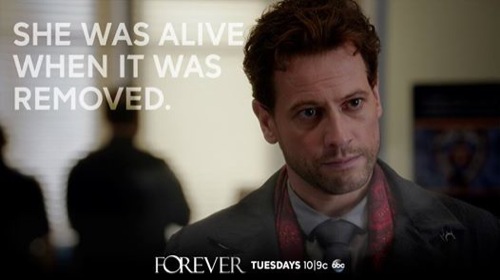 On the last episode what looksed like a drug overdose death of a reformed junkie-turned community activist resulted in Henry and Jo tracking a murderer. The complex investigation involved dirty dealings between a real estate developer and a community organizer with millions of dollars at stake. Henry flashed back to the same 1890s New York tenement where he worked as a doctor to help the poor, including an orphan boy who gave him a special handmade gift. Meanwhile, Abe cooked up a Sunday dinner feast for Henry, Jo and himself. When Jo tried to find out how the two men knew one another, Henry weaved an elaborate tale to cover the truth. Did you watch last night’s episode? If you missed it we have a full and detailed recap right here for you.

On tonight’s episode, when a human heart is delivered fresh out of a body to the homicide division, Henry and Jo end up in the middle of a Jack the Ripper copycat murder investigation. But it doesn’t stop there. A second killing resembles another infamous, unsolved crime: the Black Dahlia murder. Henry has seen it all before, as flashbacks show his involvement with the two original cases from two very different periods of his long life. However, Henry’s anonymous caller tips him to search beyond the clues of these classic killings and leads the police squad to profile a very different, yet disturbed suspect.

Tonight’s episode is going to be another great episode, which you won’t want to miss. So be sure to tune in for our live coverage of ABC’s Forever Season 1 episode 6 — tonight at 10PM EST!

Tonight’s episode of Forever begins with a woman named Mary leaving a hotel, she tips the doorman $100 and says that is has been a good night. She heads up the dark street and someone pulls her into an alley.

Henry and Lucas are working in the autopsy room on a body. Henry announces that it was another heart attack and Lucas is disappointed because it’s not exciting. They receive a phone call from Jo demanding that Henry comes to the police station. They received an anonymous package and it is bleeding. Henry opens the box and discovers that it is a human heart.

Henry and Lucas take the heart back to the lab, but are unable to find any fingerprints on the organ or the package that it came in. He can tell though that it was expertly cut out of a female about five days ago, judging from the heart the female came from a woman around the age of thirty who was in relatively healthy condition.

Jo pulls all of the missing persons for women around the age of thirty, they find a woman named Mary Kelley who dabbled in prostitution when she isn’t at NYU. They pull her credit card records and see that he took a cab to a hotel about a week ago. They head to the hotel that Mary came out of, and the doorman confesses that she was there a few nights ago. Henry finds the shady alley next to the hotel and thinks the killer might have snatched her there.

Next door to the hotel is a butcher shop called Dorset Kelley Meats and Sausages. Henry reveals to Jo and Hanson that the killer is a copycat. In London in 1888 Henry worked on a case of a serial killer, Jack The Ripper, who killed prostitutes on Dorset Street, one of them was named Mary Kelley. They head in to the butcher shop and find Mary’s dead body laying on the empty store’s abandoned counter. He says that the killer is mirroring Jack Ripper’s murder of Mary Kelley. While the police are showing up at the crime scene Henry receives a phone call from the same man that called him before and said they “suffer the same affliction.” He knows about Mary’s murder and tells Henry it must be amazing to be reliving the hysteria created by Jack The Ripper in London. Henry demands to know how he knows about the body because the police are just arriving, he rushes outside and sees an open cell phone sitting on the wall.

Henry rushes home and fills Abe in on the day’s events, he shows Abe the phone and Abe says it is a burner and there is no way to trace it back to the owner. Henry thinks that Jack The Ripper might Adam, and is unable to die just like Henry. Henry has a plan to catch the Ripper. In order to copy the killings he needs to use a special antique scalpel and Henry wants to plant those scalpels in antique stores to see if the Ripper comes in to buy them.

Henry begins Mary’s autopsy, he reveals to Joe that every single tiny cut and wound is identical to Mary’s from 1888. But, there is one difference, the cut on Mary’s wrist is in the shape of a star instead of a half-moon. Henry remembers that back in 1888 one of the newspapers wrongly reported that there was a star on Mary Kelley’s arm. They head to the library to see if anyone has checked out that 1888 print of the newspaper, and learn a man named J. Elroy checked out the paper. While they are at the library a man sees them and runs out the back door. Jo chases after him and while she is wrestling him down Henry receives another phone call from his mystery friend. He reveals that the killer will be mocking more than serial killer, and his next victim will mirror The Black Dahlia.

Jo brings in the suspect she picked up at the library, and asks him why he checked out books on Jack The Ripper and Mary Kelley. She shows him pictures of Mary Kelley’s body, and he insists that he isn’t a murderer, he is a writer. He has been taking out books to do research for his comic book called “Soul Slasher,” his whole last series was about Jack The Ripper. The only reason he ran when he saw them was because he thought they were crazy stalker fans, fans of his comic book are psychos.

Another body pops up in the park, and all of the blood has been drained from the body before it was dumped in the park. They realize that this body was a mockery of the Boston strangler, and find nylon in the corpse’s mouth. Henry finds bootprints in the mud next to the body and are sure they belong to the killer. He also finds a leaf next to the body from a gingko tree, the only place in NY with gingko trees is a garden in Brooklyn. Abe heads to another antique shop where the scalpel that was used on the Jack the Ripped patient, and steals the ledger from the store – the only problem is all the names are in code.

Jo finds a diehard Soul Slasher fan on the comic book’s website that lives in Brooklyn, they rush his house and arrest a man on the computer. Jo is confused because the fan is still online after the arrest is made. They rush upstairs and find a ten boy on his computer on the Soul Slasher website. They bring him in for questioning, and he basically laughs in Jo’s face. Devon is sure that they aren’t going to be able to charge him. Jo points out that he bragged on the website that he had murdered someone, but Devon reminds her they have no DNA or proof.

Devon’s parents argue with Jo that they have no right to keep him in custody and no proof, Henry insists that once they decipher the code in the antique ledger they will be able to prove that Devon bought it. Henry explains the ledger to Jo and she is furious that Abe stole it, now they can’t use the evidence in court because it was obtained illegally. Jo heads to the judge and tries to get a warrant.

Henry heads to the antique shop to return the ledger, and the store owner reveals to him that the person that bought the scalpel wasn’t a teen, it was a man in a polo shirt. Henry remembers Devon’s dad wearing a polo shirt and realize they got the wrong Bentley, he rushes out of the store. Devon’s dad is waiting for him in the alley and stabs him in the back and leaves him for dead. He rushes back inside and finds Bentley about to kill the store owner, he wrestles him down and they wind up falling down a flight of stairs.

Jo arrives at the store and runs inside, she finds Devon’s dad and he tries to pull a gun on her but she shoots him to death. Henry is lying at the bottom of the stairs with a broken back and a scalpel in his back. Suddenly a man arrives at Henry’s side, and says that his partner is going to find him and he can’t die in front of her. He tells Henry he can “thank him later” and then he slices Henry’s neck and finishes the job, and Henry comes back to life in the river.