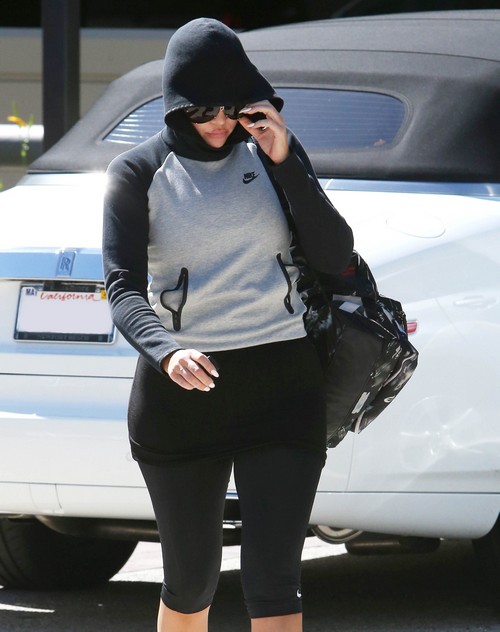 Khloe Kardashian and French Montana’s whirlwind romance came to an end last month, (Lamar Odom!) however they lasted longer than any of us expected they would. According to recent reports Khloe is now in the process of reconciling with her husband Lamar Odom, but French Montana is making it very hard for the Keeping Up With The Kardashians star to move on, and is determined to steal her back from Lamar Odom.

Sure Khloe Kardashian has been hitting the gym religiously, but why is French Montana so desperate to win her back? Well, we spoke to a pal of French’s and learned there is a lot more at stake than just Khloe’s wishy washy heart. The latest Kardashian spin-off series Kourtney & Khloe Take The Hamptons is set to debut this month on E! and French Montana will appear in every episode at Khloe’s side. Apparently, French was also in talks with producers of VH1’s Love & Hip Hop, they wanted him and Khloe to appear on the next season.

According to our CDL exclusive inside source, Khloe and French made an agreement with each other. He filmed Keeping up With The Kardashian’s Hampton spin-off with her, and in exchange she was going to film Love & Hip Hop with him. But, when news broke that French and Khloe had broken up, suddenly Love & Hip Hop didn’t want French anymore, the deal was off the table!

The source goes on to explain, “French wasted half his summer in the Hamptons for Khloe’s ridiculous show, and embarrassing himself. He was really looking forward to starring on Love & Hip Hop, he loves the show and knew it would help out his brand. Now, he lost the deal all together because Khloe can’t make up her mind about whether or not she should divorce Lamar or be with him. French doesn’t want Khloe back, he wants her to fulfill her end of their agreement so he can be on Love & Hip Hop.”

Do you think French Montana has a reason to be upset? Did Khloe screw him over, or is he being petty? One thing is for sure, the rumors about French using Khloe to boost his career were obviously true, and he has no problem admitting it. At least now we know why he is trying so hard to get back together with Khloe, do you think her E! contract would have even allowed her to film Love & Hip Hop if she and French hadn’t broken up? Let us know what you think in the comments below!