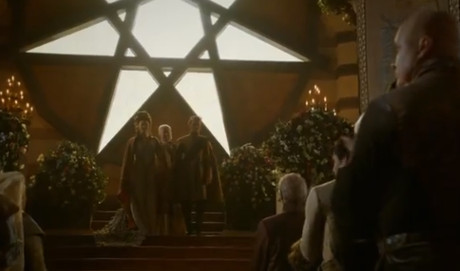 HBO has released their first look at Game of Thrones season 4 and, OMG, it has us bouncing up and down. After what happened last season, it seemed like a cruel punishment to take away the show and leave us sitting around for several months with nothing to do but fantasize about what’ll come next. We probably could’ve read the books; however, we wouldn’t want to spoil the television show for ourselves *winks*. Game of Thrones is scheduled to return to HBO on April 6th. While we do have a little while to wait, the day is quickly approaching and, as HBO continues to release their enticing promo materials, the time should go by fast.

In the teaser trailer, which is very substantial and wholesome in terms of scene snippets, Daenarys continues to assert her power with her newfound army and Joffrey (as usual) continues to live in a world of delusion and ignorance. On this upcoming season, we can expect the White Walkers to make their moves, a marriage between Joffrey and Margaery, and much more that’ll have our fave characters staring evil in the face. “There’s only one hell,” suggests Melisandre, “the one we live in now.”

If there’s one thing we can look forward to on this new season of GoT it’s that the fight for the throne is going to be more intense than ever. Whose side will you align yourself with? Tell us in the comments section below. Watch the trailer and let us know what you think!