Game Of Thrones Season 5 Spoilers: Cersei Lannister Will Get Thrown Out King’s Landing By ‘Faith Of The Seven’ 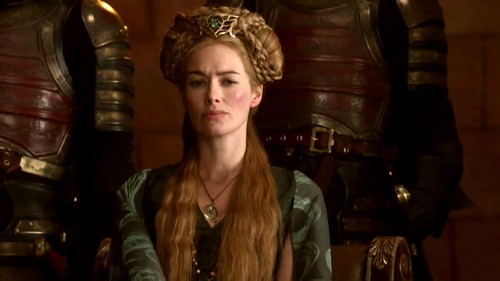 In Season 5 of Game of Thrones, spoilers indicate that Cersei Lannister is about to get driven out of power and forced to endure humiliation beyond what most of other the characters ever go through. Most people love to hate Cersei Lannister [Lena Headey], although not nearly as much as they loved to hate her son, Joffrey Lannister [Jack Gleeson]. However, her arc in the books is filled with humiliation and sorrow, and you can’t help but feel for her towards the end of A Dance With Dragons, which is the last book that George R. R. Martin has released.

After Tywin Lannister’s [Charles Dance] death, Cersei Lannister becomes the Queen Regent, ruling over the Westeros and her son’s life with an iron fist. She conspires to remove Margaery Tyrell [Natalie Dormer] from her engagement to Tommen Lannister [Dean-Charles Chapman], knowing full well that the minute Margery marries him, he’ll start listening to her instead of his mother. So she goes ahead and accuses Margaery of infidelity, and Margaery gets thrown into a prison cell.

However, Cersei messes up several times as Queen Regent, most notably in allowing the faith-based militant group called The Order of the Seven to gain power. They end up taking over King’s Landing with Cersei’s aid, but then turn on her. They accuse her of sleeping around with a plethora of men [including her own brother], and as punishment, she’s forced to shave her head, strip naked, and walk through the streets of King’s Landing.

She’s almost murdered and raped, but she gets rescued at the last possible minute – and then her story comes to an end, thanks to that troll author. WRITE FASTER, GEORGE R. R. MARTIN!

Now, all of this seems like it’s only enough to last one season, unless the writers manage to stretch it out to two more seasons. Even then, the writers of the TV show will probably have to come up with some twists and turns to Cersei’s story line. Thus, we’re guessing that they’ll make the Order of the Seven an integral part of the plot, including information about their formation and creating closer connections to Cersei – which will make it all the more devastating when they turn on her and cast her from King’s Landing, of course.