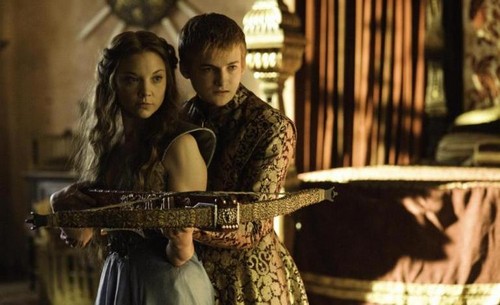 On tonight’s GAME OF THRONES the action did not stop again.  I almost feel like I have to watch the episode twice to make sure I did not miss anything, I cannot wait till next week.  Next week’s episode is called, “The Lion and the Rose” and we have managed to get our hands on some juicy spoilers and a sneak peek video of next week’s episode.

On tonight’s show Tyrion welcomed a surprise guest to King’s Landing for the royal wedding, but feared he’s come to the Red Keep for something else. Meanwhile, Jon warned his skeptical Night’s Watch superiors about an impending attack; Jaime struggled to regain his status at home; Arya encountered a face from her past; and Daario Naharis discussed strategy with Daenerys on the journey to the slave city Meereen.  More happened, did you watch tonight’s show?  We did and we recapped it for you HERE!

Spoiler alert: If you’re one of those people who doesn’t like spoilers, stop reading now! We have some juicy spoilers for you about the season 4 episode 2 HBO’s “Game Of Thrones.”

HBO’s Official Synopsis: “A who’s who of honored guests turns out for Joffrey and Margaery’s wedding in King’s Landing, but the king’s taste in entertainment rubs many of them the wrong way. Meanwhile, Bronn gives a lesson to an unlikely pupil; Bran’s vision helps map out his journey; Stannis loses patience with Davos; and Ramsay takes a perverse delight in his new pet.”

On next week’s show, the title is a reference to the sigils of House Lannister (Lion) and House Tyrell (Rose). In the books Margaery Tyrell is sometimes referred to as “the Little Rose”.  Tyrion lends Jaime (Nikolaj Coster-Waldau) a hand. Joffrey (Jack Gleeson) and Margaery (Natalie Dormer) host a breakfast. At Dragonstone, Stannis (Stephen Dillane) loses patience with Davos (Liam Cunningham). Ramsay (Iwan Rheon) finds a purpose for his pet. North of the Wall, Bran (Isaac Hempstead Wright) sees where they must go.

The Game Of Thrones Season 4, Episode 2 “The Lion and the Rose” airs on HBO on April 13th, 2014. Check out the preview videos from episode 2 below and let us know in the comments below what you think!