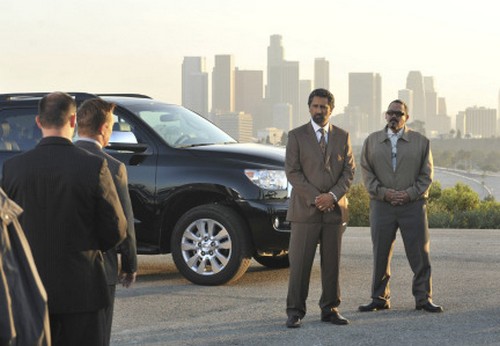 Tonight on FOX Gang Related continues with an all new episode called “Perros.” On tonight’s episode, a sex-trafficking ring run by Russian mobsters is discovered by the Task Force, but Ryan’s attempt to put the gang’s leader in jail could jeopardize Javier’s plans to legitimize the Acosta family business.

On last week’s episode Ryan and the Gang Task Force brought a Colombian snitch to Federal Court to testify, but were ambushed en route. Ryan was torn between his Task Force duties and giving up the snitch’s location to help Javier and the Acosta family go legit.  Did you watch last week’s episode?  If you missed it we have a full and detailed recap, right here for you.

On tonight’s episode The Gang Task Force discovers a sex-trafficking ring run by a Russian mafia family, which eventually leads them to a gruesome discovery. Ryan is faced with a difficult decision when he moves to put the gang’s leader behind bars, but learns that doing so will significantly delay Javier’s plans to get his family on a better track.

Tonight you don’t want to miss the fourth episode of Gang Related, so be sure to tune in at 9 Pm EST on FOX and we’ll be recapping it right here for you but in the meantime, hit up the comments and let us know your thoughts on the show.

Marco works with Carlos. He has him lifting himself up off his chair and then Carlos falls and is in pain. He curses and Marco says you have to learn to use the chair to learn to get around his house and in and out of bed. He says getting into the bed from the chair is a process. He hops into the chair and demonstrates how to move to the sofa and how moving too soon flips the chair.

He puts Carlos back in the chair and he tries and falls again. Marco says you have to learn to roll before you relearn to walk. He pours Carlos a drink and says it’s about making the effort. He joins him for a shot and Carlos smiles a little.

Sam tells Vee she needs to go see Anton. She says it’s too dangerous but he says they have no other option. She relents and goes to talk to him. She tells him about the missing girls and babies and he says she knows he can’t tell her about it. He asks how she is and she says she’s been better. They speak Russian. He relents and tells her that he’ll tell her what he knows if she tells him what’s wrong.

She sits back down as he lights a smoke. She asks if he cares and he says he’s her brother and being locked up doesn’t change that. She takes a cigarette and tucks it behind her ear. Vee says she got stuck with a needle that had HIV on it. She says she doesn’t know yet if she has the virus. He asks when she’ll know and she says six months. He tells her he’s sorry.

She tells him to tell what he knows. Anton says there is a doctor he heard about named Pasha they call the Baby Maker. The guard comes in and tells her time’s up. Anton tells her to take care and she tells him to do the same.

Javier meets with the drug dealers who have decided to work with him. Ivan is there as well and is told he’ll be their man on the ground. The Russian want to debate on price since they have a larger network and can sell all over the world. The Asian and biker crews are angry that they would get a better place. He says the other two groups felt the same way and Javier pops the trunk to show them the dead bodies of the two reps that didn’t sign up. He tells them to sign up or go down.

Ryan tells Sam about the bleach and barking dogs. They try to figure out what that means and they wonder if Pasha is a veterinarian. Cassius runs a search and they find the guy – sure enough, he’s a vet.

Daniel greets Senor Mendoza. He has $43,000 in cash he wants to put in the bank for his son’s college education. The problem is that he hasn’t paid taxes on the money and that means they have to submit paperwork. Daniel says he can’t take an illegal deposit. Mendoza asks if they can get around it but Daniel says he has to do things by the books.

Sam meets with Agent Nelson about Daniel’s bank. We see a pic of Javier. Nelson introduces Thomas Luiz aka Billy Cabrera – he’s working undercover as Daniel’s loan manager. They wonder if Daniel will be laundering fish scale money for his dad. Billy says he doesn’t think he’s that kind of guy but Sam want him to get Daniel to bend the rules so they can nail him.

Carlos is brought to a house party. He greets his homies. A girl comes over and kisses him thoroughly. He pulls back and asks who it is and they tell him that’s his welcome home gift. They tell him to take hre for a ride. He follows her. They go somewhere private and she strips to bra and panties. He kisses her and she asks if everything is okay down there.

He tells her to keep doing what she’s doing but he looks increasingly frustrated. She tells him it’s okay and happens to everyone and he says not to me and she says it will be their little secret. She gets off his lap and takes her clothes and goes.

Jessica tells Ryan and Sam that Pasha has no record. She says she can’t get a warrant without the CI’s name and they say they can’t give it up. Ryan says he’s going in with or without a warrant because young girls and their babies are at risk. She says she’ll get the warrant and tells them to go make it right. The crew sneaks up on Pasha’s clinic with guns drawn.

A woman sees them and runs. They kick in the door and Cassius shoots a guy. They come to a locked door and Ryan busts the glass while Sam holds a gun on the guy who has a hostage. Cops come in from the other side and one of the cops shoots the guy. Ryand and Sam keep going and find a woman in a cage and a pregnant woman in labor with a midwife with her. They ask where the doctor is.

He’s on the run but is pursued by Cassius who knocks him down and arrests him. Sam and Ryan press on and find crying babies – a room full of them. Sam tells Ryan to go find Ivan and calls for medics for the babies. Ryan spots him and goes after him. They brawl and Ryan beats him down and punches him half to death before Cassius pulls him off the guy.

Ryan asks why he took the girls from Jalisco. Ivan says they’re baby making machines that spit out blonde babies so easily. Ryan has his gun out and wants to shoot the guy. Cassius tells him to stand down but he doesn’t. Sam tells him to and he finally does but then gives him one last brutal punch. Sam locks the gate then flips the switch that releases a bad ass dog in there with Ivan. The dog attacks and we hear Ivan screaming.

Javier comes into his counting room and says they need to pay the Metas. He says they have to pay their way out of the drug trade. Javier says fish scale is their retirement plan. Javier says he has to get out for his family and says he can’t watch another of his kids be eaten alive like Carlos. Javier goes to see Alvarez at a taco joint. He has a bag of cash for him and Javier says he’s working to expedite his buyout.

Alvarez says he’s expecting $20 million a year from fish scale. He says Javier isn’t in a possession to make him an offer and Javier offers him $50 mill in one year. Alvarez says a clean $100 million in 18 months plus he hands over all the non-fish scale business to him. He says everything Javier owns will be his and tells him to think it through. He says his bosses will expect him to meet every payment deadline and the word of Godwon’t undo it. He says if he fails to meet a payment, he and his family will pay. They shake on it.

Ryan comes to see Lourdes and says he has a surprise for her. He gives her her baby and she’s thrilled. She calls the baby sweetheart and holds her close. Jessica is there and thanks Ryan for convincing her. She invites him out for a drink and he agrees. She leaves with a smile. He looks back at Lourdes with her baby and smiles.

Jessica tells Ryan she’s never dated a cop because her dad being a cop was enough. She says he missed dinners, birthdays, school events. She says he even missed her Easter pageant and he says he could see her as a bunny with a fluffy tail. She says she never understood what could be more important than her. Ryan says it’s a constant pull then gets a call. She asks where he wants to be right now and kisses him. He ignores the call.

Carlos is boozing when Marco comes in and says it’s a little early to be in the bottle. Carlos says no rehab today and tells him to get the hell out. Marco asks what happened and Carlos asks why he would talk to him. He says you’re not my friend, you’re my bitch since my dad is paying you. Marco says he’s been exactly where he is and Carlos says to get out.

Marco says no and says he needs to crawl out of the bottle and man up. He looks at the bottle and grabs a bat and bashes Marco in the head then beats him with it until the bat breaks. Carlos crawls up into the chair and picks up his bottle again. He asks if that’s man enough for you, bitch.

Ryan tells him Javier had it coming but Ryan says he can’t make the charges disappear. Ryan says no one can walk away from what he did to those women and their babies. Javier says he needs Slotko to be happy and Ryan says no. Javier says if Ivan doesn’t get out, they are risking a big percentage of their distribution and a delay in getting out of the business.

Ryan says he can wait if it means putting men like Ivan away. Ryan says he needs this one for him and has always done everything Javier asked for.