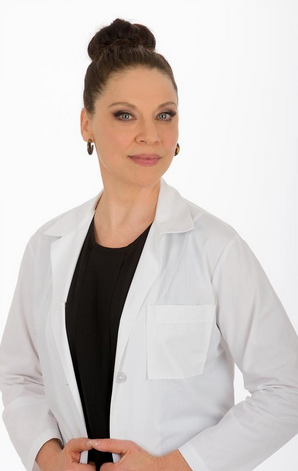 The cat is out of the bag, well half way out of the bag, on General Hospital. Dante, Lulu, and Nikolas all know that Dante is the father of Britt’s son Ben. Nobody has thought to question whether or not Lulu is the mother, but that is beside the point. When Ben’s DNA test came back, Britt claimed that she had no idea that her Mom used Dante’s sperm, and put all of the blame on her Mom Dr. Olbrecht.

Viewers know the truth, and know that Britt is far from innocent when it comes to how she became pregnant with Ben. But, let’s just pretend for a moment she isn’t lying through her teeth. Nikolas, Lulu, and Dante totally bought Britt’s story that Dr. Olbrecht stole Dante’s sperm and impregnated Britt with it. Why is nobody doing anything about it? Dante and Nikolas both just accepted the fact that Dr. Olbrecht stole his sperm sample, and used it to impregnate her daughter without his permission. Aside from being completely unethical, it’s illegal!

Dr. Olbrecht has always been a shady character on General Hospital, but it doesn’t seem right that no one is holding her accountable for her actions. Nikolas is a Cassadine, he comes from one of the most wealthy and powerful families in Port Charles. Shouldn’t he be upset that Dr. Olbrecht wrongfully impregnated his fiance with someone else’s sperm sample? Nikolas definitely has the power to do something about it, like have Dr. Olbrecht’s medical license revoked.

Dante should be angrier than any of the other characters on General Hospital, he has a son that he never knew existed. And, someone stole his sperm! He is a cop, there is no reason he can’t charge Dr. Olbrecht with something. Even if there are no legal ramifications for what Dr. Olbrecht did, he should at least call her out on the shady procedure she did on her daughter Britt.

So, General Hospital fans, do you think Dr,Olbrecht should be held accountable for stealing Dante’s sperm sample (and possibly Lulu’s egg)?