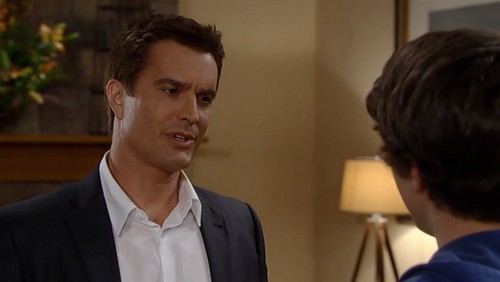 General Hospital spoilers are just General Hospital rumors that have turned out to be true. Often the rumors floating around the internet about the ABC soap have some truth to them. Look at how long rumors were popping up that Billy Miller had been cast as Jason Morgan! Right now there seems to be an abundance of GH rumors and possible spoilers floating around, here are a few of our favorites. Please keep in mind that as of right now these are just rumors – and may or may not be true.

Shawn Is TJ’s Father: General Hospital spoilers have been teasing Jordan and Shawn’s secret about TJ’s father for months now, and rumors have been popping up all over the internet that Shawn is actually TJ’s father. On the November 19th episode of General Hospital, Jordan and Shawn sat down TJ and revealed to him that they had an affair before he was born – and had a DNA test done on TJ to make sure he was Thomas’s son and not Shawn’s. Rumor has it that Jordan tampered with the DNA test, and Shawn is actually TJ’s biological father, not Thomas.

Anders Hove Returning As Cesar Faison: If we have learned anything this year on General Hospital, it’s to never count a character out because they are presumed dead. Right now Anna Devane is in a world of trouble with the WSB for possibly murdering Cesar Faison (not that we blame her), and Obrecht has pushed Britt to have charges pressed against Anna for the crime. The only way Anna can get out of this is if it turns out Cesar is still alive and she didn’t kill him – and rumor has it that is exactly what will happen.

Ric Lansing Returns To Port Charles: Remember Ric Lansing? Many deaths and arrests ago Ric was a major player in the Port Charles mob wars, and Sonny Corinthos was certain Ric was financing Julian jerome’s organization and wanted him taken out. Unfortunately Julian got to Ric first and framed him for a murder. Anna Devane helped Ric stage his death in prison and sent him away under a new identity. Ric is in witness protection because Luke had Julian set him up. Rumor has it that Ric Lansing is headed back to Port Charles.

Sonny And Carly Wedding: Sonny Corinthos and Carly have been around the block a few times together, so we were about due for another Carly and Sonny love story. But, this time the dynamic duo are in way over their heads and could both be doing some substantial jail time. According to General Hospital rumors, Sonny and Carly are going to get married so that they can’t testify against each other in their upcoming court cases.

Elizabeth’s Love Quadrangle: According to General Hospital rumors, Liz becomes a hot commodity in Port Charles this Winter. Liz already is living with Jason Morgan AKA Jake and developing feelings for him. But, when Nikolas learns that Britt faked Spencer’s kidnapping and she leaves town, he makes it his mission to win back Liz. Nik and Jake are going to have some tough competition though, because when Ric returns to Port Charles he expects him and Liz to pick up where they left off.

Bradford Anderson Returning As Spinelli: Bradford Anderson recently revealed in a Soap Opera Digest interview that he desperately wants his character Spinelli to return to General Hospital. His comments about “itching to get back to work” along with the fact that Maxie Jones is headed back to court soon to try and get visitation rights to the daughter that the couple share has spurred a slew of GH rumors claiming that Spinelli is making a come back. Considering the fact that Anderson wants to return and he currently has custody of Maxie’s daughter, who she is trying to see, there is a good chance there is some truth to the rumors.

Merry Christmas – I’m Jason Morgan: General Hospital fans have been on the edge of their seats since Jake waltzed (or was carried on a stretched) into General Hospital, and eagerly waiting for his true identity to be revealed. According to GH rumors floating around the internet, Jake will slowly begin regaining his memory and during the show’s Christmas episodes it will be revealed to his friends and loved ones that he is actually Jason Morgan.

So GH fans, what do you think of the latest General Hospital spoilers rumors? Would you like to see Ric Lansing or Damian Spinelli return? Should Liz choose Jake, Nikolas, or Ric? Is Cesar Faison really dead? Will Sonny and Carly really get married? Let us know what you think in the comments below and don’t forget to check CDL tomorrow for more General Hospital spoilers and news.