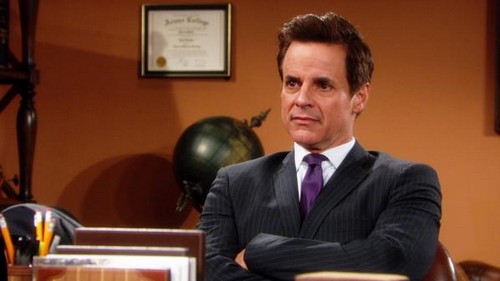 We have been reporting General Hospital spoilers, news, and coming and goings for months now – and with the holidays steadily approaching and 2015 right around the corner, it got us to thinking about our Christmas Wish Lists. With all of the crazy storylines on the ABC soap right now, we could think of a million things to put on our General Hospital Christmas Wish List – but we managed to narrow it down to ten items. Here’s what spoilers and rumors we hope come true on General Hospital in 2015.

10. Free The Crazies: Nina, Franco, Sonny, and Ava are all certifiably crazy and unfortunately they are all in jail cells right now. Orange Is the New Black is totally hip right now – and we get why the writers wanted to make the villains finally do some time for their crimes. But, we’re not sure how much longer we can watch characters talk through bars and bulletproof glass. Free the crazies already!

9. Ned & Olivia: Our hearts still hurt for Olivia, as always Ned was a perfect gentleman and he let her down easy – but it still was SO sad. Olivia is head over heels in love with Ned, and he is all hung up on Alexis, who doesn’t deserve him at all. Here’s to hoping Ned realizes how awesome Olivia is in 2015!

8. Silas & Ava: The chemistry between Silas and Ava has been undeniable since he helped her find her daughter and they have “Future GH Super Couple” written all over them. We really want to see Silas and Ava hook up when she gets out of jail.

7. Enough Zombies: There are so many people walking around Port Charles that are supposed to be dead – that we feel like we are watching The Walking Dead instead of our beloved General Hospital. Let’s leave some of the dead people dead for a while, it’s getting a little too sci-fi for us.

6. Reel Michael In: We get that Michael Quartermaine has been totally screwed over by all of his friends and family, but he is getting a little too bitter for our liking. Michael is getting older and it’s obvious the writers are trying to groom him in to a little mobster – but does he have to be SO mean and angry? When was the last time he cracked a smile?

5. Trim The Fat: Ron Carlivati’s New Year resolution for General Hospital should be to trim some of the ABC soap’s fat. There are way too many extra characters running around town that really have no storylines. If they’re not going to cut the extra characters loose, then they could at least stop hiring more and bringing someone back form the dead every week. Port Charles is becoming extremely crowded.

4. Evil Duke: When rumors began circulating that Duke may be Fluke, or could even be trying to steal Sonny’s territory from him – we were intrigued. Let Duke be a badass! Sure Duke is a sweet guy and all, but how much more fun would General Hospital be if he suddenly became evil or a little less predictable?

3. Get Back To The Love: With all of the mob drama and drug smuggling and imposters, there’s not a whole lot of love left in Port Charles. There are way too many single people running around town for a daytime soap opera. We miss the hot makeout sessions, affairs, and steamy hook-ups.

2. Christian LeBlanc: Rumors have been running rampant on the internet that Y&R star Christian LeBlanc’s character Michael Baldwin is being killed off – and he might be coming over to General Hospital. And, Christian would be an awesome addition to the cast! We can already envision him playing a dirty lawyer or hooking up with Ava Jerome or Alexis.

1. Obviously the number one thing on our General Hospital wish list is…to know who Fluke is. We don’t even care who he is anymore, we don’t care if he is Tracy’s mail man. Just wrap it up already!

So GH fans, do you agree with our GH Wish List? What would you add or remove? Do you think Christian LeBlanc should join General Hospital? Will Ned and Olivia get together, what about Silas and Ava? Would you like it if Duke were evil? Let us know what you think in the comments below and don’t forget to check CDL tomorrow for more General Hospital spoilers and news!