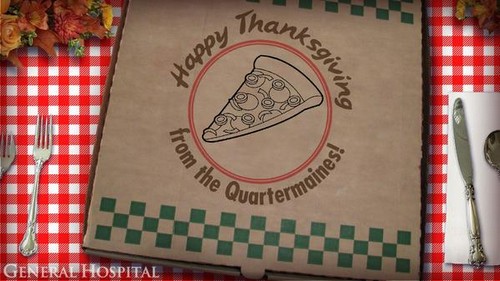 General Hospital spoilers have been teasing the Fluke mystery for months now, and it seems like with every episode it becomes more and more complicated, and involves more and more GH characters. Since it was first revealed that there was a Luke Spencer imposter in Port Charles, General Hospital fans began noticing that Duke Lavery was acting odd and some speculated that he may be Fluke. In recent episodes of the ABC soap Fluke visited the real Luke Spencer while he was in Miscavige while Duke was sitting in Pentonville, so it’s pretty impossible that Duke is Fluke, but that doesn’t mean he isn’t involved in the scheme.

General Hospital spoilers reveal that on the November 25 episode Sonny and Duke meet at the prison. Sonny reveals to Duke that he is a free man. Sonny tells Duke that part of the deal he made was if he pled guilty then Carly and Duke could walk. Duke is grateful and continues to pledge his loyalty to Sonny; however, the character’s demeanor is off, and multiple GH fans have noticed it and taken to the internet to discuss it. Fluke’s main goals were to take down Sonny Corinthos and gain control of his infrastructure so he could flood Port Charles with drugs (which are anathema to Sonny) and also grab ELQ. Sonny revealed to Duke that he is handing him over full control of his business while he is in prison. If Duke is behind the Fluke scheme – then Sonny just handed him one-half of exactly what he wants on a silver platter.

Now, general consensus among General Hospital fans is that Duke is somehow involved with Fluke, but the possibilities are really endless. For all we know there may be a Duke Lavery imposter running around Port Charles as well. Cesar Faison has been on the run for a year now, and he has already used a mask once to dupe everyone into thinking that he was Duke. Duke was off the canvas for years when he was locked away in a Turkish prison, who knows who he got caught up with while he was away, perhaps he has been playing everyone since he returned to Port Charles. One thing we do know is  that Cesar Faison can’t be a fake Duke at this time since we know Duke was in jail while Cesar was running around Port Charles. What do you think, GH fans? Has Duke been acting suspicious lately? Do you think he is involved with Fluke, or could even be behind the entire scheme? Did Sonny just make a huge mistake by handing over his business to Duke?

There is another wild possibility that must be mentioned. Did Helena Cassasine kill or injure Luke? After all, she was wiping off her knife when she greeted Julian and Alexis as they were just at the door of Luke’s cell!! Let us know what you think in the comments below and don’t forget to check CDL tomorrow for more General Hospital spoilers and news.