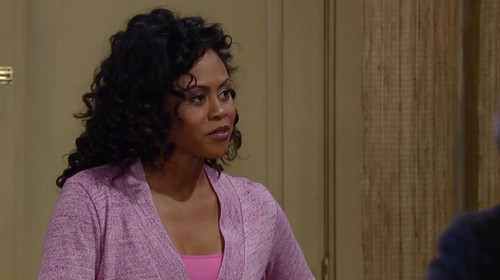 General Hospital spoilers reveal that our favorite Port Charles residents will spend the week of December 29 – January 2 celebrating New Year’s Eve, and there will not be a dull moment on the ABC soap. While romance is in the air for some couples, the night is problematic for other couples. According to General Hospital spoilers, this is what GH fans can expect to see during the week of December 29.

Monday December 29: General Hospital spoilers tease that Maxie and Nathan are determined to spend the holiday together, unfortunately they are on opposite ends of the country – and holiday travel conditions are not working in their favor. Meanwhile in Port Charles Sam Morgan and Patrick Drake will discuss their feelings for each other, and decide to spend New Year’s Eve together as a couple.

Tuesday December 30: On Tuesday’s episode of the ABC soap the New Year’s Eve festivities begin and everyone heads to the Metro Court to bring in the New Year. While Carly is working to help her new friend Jake/Jason Morgan find a job, GH spoilers tease that there are some tense run-ins at the New Year’s Eve party when Alexis arrives with Ned and spots Julian.

Wednesday December 31: ABC will air a re-run of General Hospital on December 31st.

Thursday January 1: General Hospital will not air on ABC on New Year’s Day.

Friday January 2: On the Friday January 2 episode of General Hospital, spoilers tease that the New Year’s Eve party at the metro court will continue. Romance is in the air for Elizabeth and a special friend of her’s, and Jake and Carly find themselves in a “compromising position.” General Hospital spoilers also tease that Duke and Lucy will have a chat about their feelings for each other and whether or not they have a future together.

So GH fans, are you excited to see the New Year’s Eve festivities in Port Charles? How do you feel about Duke and Lucy possibly hooking up? What compromising position could Jake and Carly find themselves in, do you believe the rumors that they may become involved romantically? Do Sam and Patrick belong together? Let us know what you think in the comments below and don’t forget to check CDL tomorrow for more General Hospital spoilers, news and rumors.