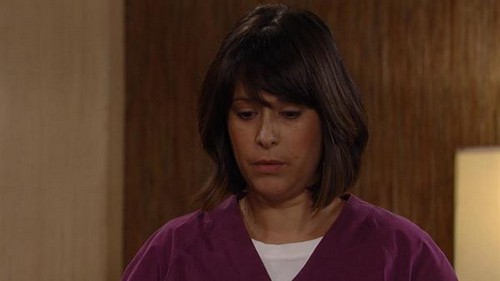 General Hospital fans will not want to a miss an episode of the ABC soap opera this week, September 29 – October 2! The Port Charles mob war between the Jerome and Corinthos crime families is heating up, seeing as how Julian was ordered to take out Michael Corinthos, and Sonny Corinthos is trying to kidnap Ava Jerome. And, the highly anticipated Fake Luke reveal gets a little closer, as several members of Port Charles begin realizing that something is a little off with Luke Spencer.

Monday September 29: GH spoilers for Monday reveal that Tracy Quartermaine has finally woke up and realized what viewers at home have realized weeks ago, Luke Spencer is not exactly himself these days. Determined to find answers after Luke doesn’t even bother returning to Port Charles for his daughter Lulu Spencer’s homecoming after Levi/Peter kidnapped her, Tracy sets up a meeting with him on September 29th.

Tuesday September 30: Alexis was trying to figure out who Julian’s mob boss was for months, but when some new information falls in to her lap on September 30th, Alexis makes the shocking realization that Julian has been taking orders from Luke Spencer all this time. General Hospital spoilers also tease that on Tuesday’s episode of GH, Franco will share his plans with Nina regarding his unexpected engagement to Carly, and reveal to his comrade that he knows Carly cheated on him with Sonny.

Wednesday October 1: Since Jason Morgan was rushed to the hospital after Ava Jerome ran him over, Elizabeth has been standing by the stranger’s side. According to Wednesday’s spoilers, Elizabeth will receive an update on Jason’s condition and grow more attached to the mysterious mute patient. Also on October 1st, Sonny and Julian face off, and Ava continues to keep a low profile and avoid being discovered by Corinthos’s men.

Thursday October 2: According to General Hospital spoilers, on Thursday Patrick will reveal to Sabrina that he doesn’t think Ava Jerome had anything to do with the car accident that killed their infant son Gabriel, and he shares his theory with her about who is really behind the deed. Naturally Sabrina is torn, if Ava isn’t responsible for killing Gabriel, then she just gave Ava pills to kill her innocent baby for no reason.

Friday October 3: GH spoilers reveal that you will not want to miss the Friday episode of the popular soap opera! Elizabeth gets news on Jason Morgan’s injuries, and it looks like his survival rate is high and Jason will live. Meanwhile, Sam and Patrick are on another mission, to find Fake Luke since and get some answers from the mobster!

So General Hospital fans, which spoilers are you most looking forward to see this week? Do you think that Elizabeth’s attachment to Jason Morgan could mean that she is his new love interest and he isn’t getting back together with Sam anytime soon? What about all of the people in Port Charles who are putting two and two together and realizing Fake Luke is not who he claims to be? Who do you think the imposter is? Let us know what you think in the comments below and don’t forget to check CDL tomorrow for more General Hospital spoilers.