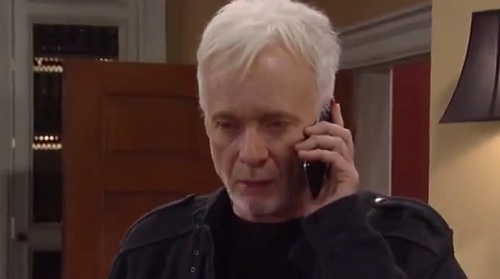 General Hospital spoilers revealed quite a while ago that when Fluke returned to Port Charles this month, it would be revealed that he has an unexpected partner-in-crime, and GH fans are supposed to be shocked when we see who the impostor has been working with. Well, according to GH spoilers – on tomorrow’s episode of the ABC soap we will finally learn who Fluke’s secret accomplice is. In the General Hospital promo video for Thursday, December 11, Fluke heads to the docks to meet his secret partner and calls out “come out, come out, wherever you are.”

It’s really anyone’s guess who Fluke may be working with, at this point. A popular rumor making its rounds on the internet is that Fluke may have partnered with Ric Lansing – and that is why he is missing from the witness protection program. We’re not totally buying it though, because Fluke is the one that ordered Julian to frame Ric – but hey stranger things have happened in Port Charles. While other GH fans theorize that Fluke’s partner-in-crime is none other than Sonny Corintho’s right-hand-man, Duke. Or Fluke’s partner could be one of the many members of the not-so-dead Cassadine Family.

General Hospital spoilers tease that it looks like Franco and Nina have reached the end of the line – and it is only a matter of time before the jig is up and they have no choice but to hand over Ava Jerome’s baby. On the December 10th episode of General Hospital it was revealed that Dante has found a witness that knows where Nina and Franco wen. A girl in Canada has just recognized Franco, and Silas has found an art contact that may know where Franco is hiding and he is on the case with Morgan, Kiki, and Ava. In the General Hospital spoiler video for Thursday’s episode of the ABC Soap, Dante informs Anna he has information on where Ava’s baby may be – and in Canada, Nina and Franco begin to panic that their cover is blown.

And, in other General Hospital news, Sam Morgan and “Jake” continue to work together to identify the mysterious gunman that took her hostage. Spoilers tease that on December 11th Nathan will receive flowers from a “secret admirer” and Sonny Corinthos apparently breaks up with Carly.

So, GH fans, who do you think is working with Fluke? Is it Ric Lansing, Duke, another Cassadine that we thought was dead? Or is it a completely random character that we never would have expected? Let us know what you think in the comments below and don’t forget to check CDL tomorrow for more General Hospital spoilers and news.