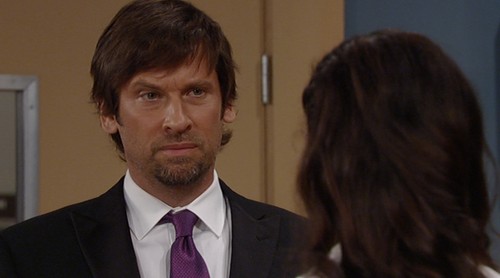 General Hospital spoilers tell fans they will watch some amazing soap opera TV on Thursday November 13. GH rumors have been teasing fans for months with Ava Jerome’s baby. We were all counting the days until she was born so we could find out if she was Sonny’s baby or Morgan’s baby. So, you can imagine GH fan’s frustration when psychotic Nina Clay basically snatched the baby out of Ava and ran off with it – and she didn’t even bother to stop at a DNA lab so we could find out who the father was, Morgan or Sonny!

According to General Hospital spoilers, crazy Nina and her BFF crazy Franco are about to ride off in to the sunset together with Ava’s baby. On the Wednesday November 12th episode of the ABC soap, Franco arranged for a boat to get out of Port Charles, after his insane almost wedding to Carly he managed to kidnap half the town, so he is wanted by the PCPD. And Nina, who is also on the run for obvious reasons, like the fact that she is toting around Ava’s baby and she left her own mother for dead under a bed sheet, joined Franco on the dock and prepared to run away from Port Charles with him.

The thing is, Nina has reached a new level of crazy. Could she be too crazy for even Franco to handle? In the General Hospital spoiler video for Thursday November 13, Franco screams at Nina, “Silas is not her father.” Apparently he has had enough of entertaining Nina’s wild fantasies, you have to be seriously unstable for someone as crazy as Franco to snap you back to reality.

Franco and Nina’s falling out at the docks on tomorrow’s spoiler video has us wondering if Franco ditches her and the baby before he leaves via boat. Let’s be honest, would you want to be stuck on a boat with Nina? Do you think Franco will take Nina and Ava’s baby with him? Let us know what you think in the comments below and don’t forget to check CDL tomorrow for more General Hospital spoilers and news.