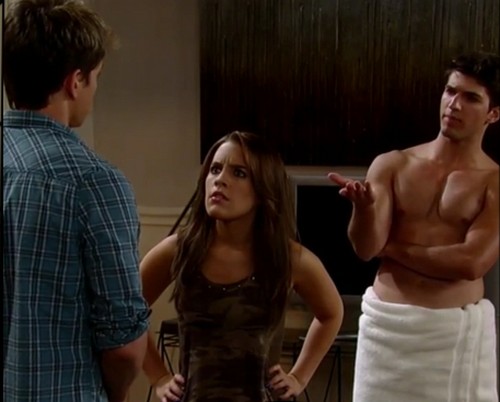 General Hospital spoilers for the week of July 14-18 tease tons of drama in Port Charles. On Friday July 11th GH fans were shocked when Rafe, who is supposed to be brain dead, opened his eyes and looked at Nina and the proceeded to sit up in his hospital bed. According to GH spoilers, on Wednesday July 16th the residents of Port Charles will say good-bye to a love one. So, either Nina was imagining seeing Rafe open his eyes, or else she kills him in his hospital room to prevent him from telling Silas her secret.

Immigration officers showed up at Maxie’s door to deport her Australian boyfriend Levi, and General Hospital spoilers for the week of July 14th tease that Maxie will go on a witch hunt trying to find out who told immigration about Levi’s expired visa. By the end of the week, Maxie will kick Nathan out of the apartment, convinced that he is the culprit. A popular theory among GH fans is that Levi actually called immigration on himself or paid men to come to his house and pose as immigration officers, to set Nathan up and give Maxie a reason to marry him.

General Hospital fans have noticed an undeniable connection developing between Kiki and her boyfriend Michael’s brother Morgan. Kiki even proposed that she move in with Morgan in the Brownstone before her cousin Rafe’s accident. In Kiki and Morgan’s defense, they were married at one point, so it’s not exactly shocking that there is still chemistry between them. According to GH spoilers, Michael picks up on the same chemistry we have been noticing for weeks now, and questions Morgan about his relationship with Kiki.

On Friday July 18th, General Hospital spoilers tease that Maxie makes a “shocking” announcement about her relationship with Levi. A GH spoiler video was just released in which Maxie announced she is getting married. So, her shocking news is most likely that she is is going to walk down the aisle with Levi in order to prevent him from being deported.

So GH fans, do you think that Rafe is alive or dead? Was Nina just imagining him opening his eyes? If by some miracle he is alive, then who is the loved one that Port Charles says good-bye to on July 16th? And, what do you think about Levi’s immigration woes? Do you think he staged the whole thing because he knew he was losing Maxie to Nathan and wanted an excuse for her to marry him? Let us know what you think in the comments below, and don’t forget to check CDL every day for all of your General Hospital spoilers.

Soap Opera Spy Facebook Page fans have much to say:

OMG Maxie is driving me nuts with this Levi obsession! I don’t like his character at all he needs to leave! Also hate to say it but if Morgan and Kiki end up together again Michael had it coming for pursuing his brothers wife in the first place! Karma!

Supposedly she went away to become a better person….she lied to the immigration officer. One question……when is she going to stop lying so she can get custody of little Georgie?! Will she ever put her daughter first?! Can’t wait when she does find out that stupid Levi was the one who called the judge AND I guarantee he is the one that called immigration to make it look like Nathan did it to set him up!!!!

i swear if it wasn’t for Nathan i would FF through anything that had to do with Maxie!!!! she keeps proving over and over again that the judge made the right decision when he ordered her to stay away from georgie.

Felicia needs to have Maxie institutionalized.

Let Maxi marry Levi and both leave town. Her stupidity gets bigger every day and frankly, she’s gotten as annoying as Levi.

There is quite a consensus building that Maxie needs to get off being stuck on stupid regarding Levi!