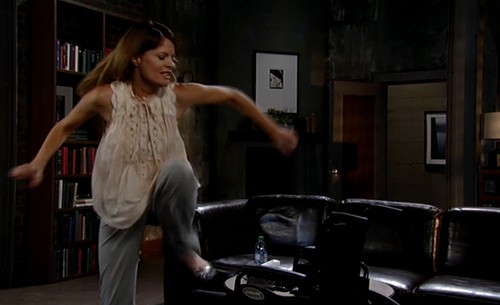 When General Hospital spoilers revealed weeks ago that Silas Clay’s wife Nina would be waking up from her coma, we all knew it was only a matter of time until the sparks flew between Nina and Ava Jerome. Before Nina was drugged by her own mother and went in to a coma for over a decade, Silas was cheating on her and having an affair with Ava Jerome, Ava’s daughter Kiki is Ava and Silas’s love child. When Nina arrived in Port Charles she was furious when she learned that she not only lost her baby that she was pregnant with, but Ava and Silas had a daughter together.

General Hospital spoilers revealed that Nina was determined to have a baby with Silas to make up for the one that she lost. After a failed attempt of drugging Silas and raping him, Nina managed to work her magic and convince Silas to have sex with her willingly, as husband and wife. On Friday August 29th Nina rushed to the hospital to have Britt check and see if she was pregnant, she really believed that she could feel the baby moving inside her, even though she had sex with Silas just a few hours ago. Britt broke the news to Nina that not only was she not pregnant, the odds of her getting pregnant are slim to none because she is starting menopause.

Now that Britt rained on Nina’s baby-making parade, she is even more bitter towards Ava Jerome, who not only had a daughter with her husband Silas but managed to miraculously get pregnant again at her age and is carrying Morgan or Sonny’s baby. According to General Hospital spoilers, Nina will run in to Ava Jerome at the hospital during the week of September 2, and GH fans will finally get to see the highly anticipated confrontation. In the September 8th edition of Soap Opera Digest, Ron Carlivati teases, “We know that Nina seriously resents this woman for sleeping with her husband and having her husband’s child when she was deprived of that.”

Ava Jerome is one scary lady, but she might just have met her match with Nina Clay, who is certifiably insane and apparently also menopausal. Who do you think will come out on top, Nina or Ava? Share your predictions in the comments below and don’t forget to check CLD tomorrow for more General Hospital spoilers.