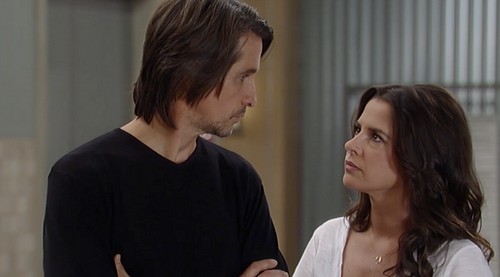 General Hospital fans have watched Nina Clay wreak havoc on the residents of Port Charles for a few months now; she has made it very clear that nothing will stop her when it comes to exacting revenge on those who (she thinks) wronged her while she was comatose for two decades. According to General Hospital spoilers, her first mission is to break up Sam and Silas… for good. And she does just that.

General Hospital spoilers tease that Nina pulls a “Kristen DiMera” and drugs and basically rapes Silas. And, conveniently, Sam walks in on Silas and Nina in a compromising position. However, Sam has no idea that Silas isn’t in his right mind; she thinks that he is willingly hooking up with Nina because he still has feelings for his wife.

However, according to GH spoilers in the August 4th edition of Soap Opera Digest, Sam doesn’t give up on Silas, despite the fact that she walked in on him with Nina. Sam continues her mission to prove Nina is up to no good. Soap Opera Digest teases, “As Sam continues her investigation in to who eavesdropped on her private conversation with Patrick and the hospital roof, and gave damning information to the reporter, she and Dr. Drake head to Nina’s place of convalescence, the Crichton-Clark Clinic – which just so happens to be where Robin was last seen with frosty Jason.”

So, it looks like Sam and Patrick will not only expose Nina’s schemes very shortly, but they may also run in to Sam’s thought-to-be-dead hubby, Jason Morgan, in the process. Do you think that Sam and Patrick will be able to prove that Nina is up to no good? Will Sam run in to Jason while she is at the Crichton-Clark Clinic? Let us know what you think in the comments section below and don’t forget to check CDL tomorrow for more General Hospital spoilers.