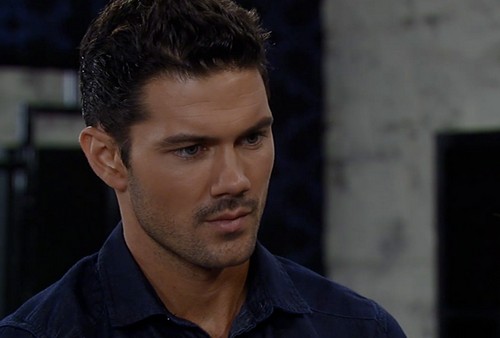 According to General Hospital spoilers, fans can’t miss a single episode of the ABC soap opera during the week of August 11-15! GH Spoilers tease that Maxie and Levi’s wedding day arrives, and it is one for the books. Right before Maxie walks down the aisle she learns that Det. Nathan West has feelings for her and begins having second thoughts about the wedding. Meanwhile, Levi will have some trouble getting to the aisle, because spoilers tease that Nathan catches him with the Aztec necklace. A General Hospital spoiler video teases that Levi pulls a gun on Nathan, and shots are fired.

General Hospital spoilers also tease that during the week of August 11, Dr. Robin Scorpio-Drake has a major medical breakthrough at Crichton-Clark, and Jason Morgan wakes up. GH fans have been waiting months for Jason Morgan’s return, and it looks like it might finally be here! Rumors have been running rampant that The Young and the Restless alum Billy Miller will be playing the part of Jason Morgan, and during the week of August 11th it looks like we might finally found out if they are true!

Love triangles are always popping up in Port Charles, and the one between Nikolas, Britt, and Elizabeth has kept fans guessing. Britt is determined to win back Nikolas, and even went as far as staging his son Spencer’s kidnapping to do so. According to General Hospital spoilers, Elizabeth might be out of the running, because on August 14th Nikolas asks Britt to move back in to the castle to live with him and Spencer! Another interesting love triangle has some shocking developments during the week of August 11th, GH spoilers tease that Nina finally breaks the news to Franco that she saw Sonny and Carly kissing, and of course all hell breaks loose.

So GH fans, are you as excited as we are for next week’s episodes? Who do you think gets shot on Maxie and Levi’s wedding day? And, who do you hope to see reprise the role of Jason Morgan? What do you think about Sonny and Carly, will they wind up back together? Share your thoughts and theories in the comments below and don’t forget to check CDL for all of your General Hospital spoilers!