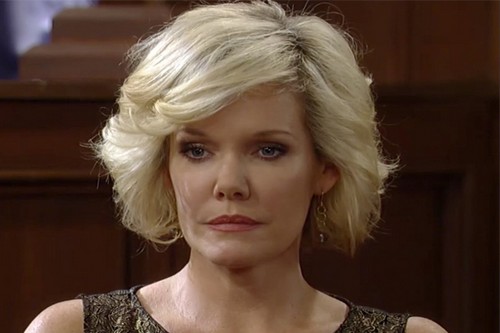 General Hospital’s Ava Jerome seems invincible, but according to GH spoilers, the mobstress may have finally met her match with Fake Luke. When Ava was backed in to a corner with Sonny Corinthos, she called the last person any of us expected to help her, Julian Jerome. After selling him out and scheming to take over his company with Sonny, Julian still helped her, but only because she offered up information on Sonny and admitted that he shot and killed AJ Quartermaine.

The GH audience has known for a while that Fake Luke was Julian’s boss; however, Ava just found out by snooping on Julian’s computer and calling the last person he video-chatted with. Ava has actually no idea how dangerous Fake Luke is; she thinks that Julian’s boss is just old Luke Spencer. She has no idea that it is actually a dangerous imposter who ordered to have her nephew Lucas shot and orchestrated a bomb attack in Alexis’s house.

According to General Hospital spoilers, Ava is about to realize just how dangerous good old Luke Spencer is. GH spoilers in the September 1st edition of ABC Soaps in Depth tease, “Ava may get a clue as to what the future holds when she gets a rather sinister request from Fluke!” General Hospital’s head writer Ron Carlivati teased to Soaps In Depth that, “Ava may just have gone form the frying pan to the fire. She escaped Sonny’s clutches only to wind up getting entangled with Fluke.”

We also can’t forget that Ava is pregnant, so she is basically carrying a huge target on her back. She doesn’t seem to truly care about anyone, and she might not even care about her unborn child. But, if something happens to that child, then she can kiss her life goodbye because Sonny has no reason to spare her. What do you think about Ava and Fluke’s new partnership? Do you think Fluke might be the one person who can finally take Ava down, or is Ava maybe the one person who can finally take Fluke down? And let’s not forget that Ava will be dealing with another crazy and deadly enemy – Nina Clay! Let us know what you think in the comments below and don’t forget to check CDL tomorrow for more General Hospital spoilers.