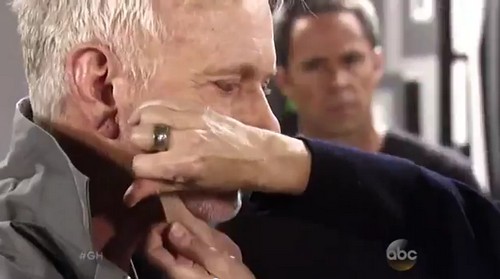 General Hospital spoilers reveal that the week of December 1-5 may finally be the week that the Fake Luke mystery is solved. An all new sneak peek promo for the ABC soap teases, “So many questions, so many secrets, so not what you thought…it’s one mind blowing week.” The Fake Luke mystery has been going on for months now, and GH fans have been racking their brains and analyzing every General Hospital spoiler and rumor – trying to figure out who the Luke Spencer impostor is that has been tormenting the people of Port Charles. But, judging from the December 1 sneak peek promo – there might be more than one Luke Spencer impostor!

Last week on General Hospital – Julian Jerome came clean to Alexis and informed her his boss was a man who had stolen Luke Spencer’s identity, and he got plastic surgery while he was in the witness protection program so that he could pass as Luke’s twin. The same week, Fluke paid the real Luke a visit and laughed in his face when he accused him of wearing a mask. Fluke even pulled on his skin and revealed that it was really his face – and definitely not a mask. So, we are certain Fluke is not wearing a mask, however in the new General Hospital promo, Anna Devane pulls a Luke Spencer mask off from someone. This really could only mean one thing, there are THREE Luke Spencers and TWO impostors running around Port Charles.

The promo video for the week of December 1-5 also teases a slew of non-Luke related drama, Sam Morgan apparently knows that Jason wasn’t dead – and can be seen screaming at Patrick and demanding to know where her hubby is. Nikolas demands that Britt come clean this instant, and it looks like she is about to confess to being Spencer’s partner in crime and helping him run away. And, the video also teases that GH fans can expect an intense confrontation between Sonny Corinthos and Johnny Zacchara, Sam Morgan appears to be kidnapped, and Dante is shooting at someone!