General Hospital Spoilers: Maxie Goes To Court To Get Georgie Back From Spinelli – Nathan Goes Outside The Law 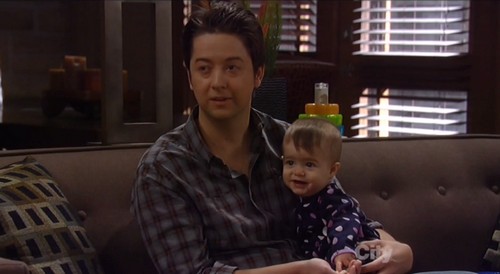 General Hospital spoilers for this week tease that Maxie is headed to court to find out the judge’s verdict regarding her custody case with Spinelli over their daughter Georgie. Maxie has been trying desperately to get visitation to see her daughter, however her ex Levi severely hurt her chances. And, to top it off the family court judge informed Maxie that if she pursued a relationship with Det. Nathan West she would never get to see Georgie again – and she has had a tough time staying away from the Port Charles cop.

According to General Hospital spoilers, the moment of truth will finally come during the week of December 15th. And, GH spoilers in the latest edition of Soap Opera Digest tease that Nathan will make sure his new love interest gets to see her daughter, by any means possible. West’s portrayer Ryan Paevey dished to the soap opera magazine, “I think he’ll [Nathan] stop at nothing to make sure whatever is crooked in this case gets straightened out. Even though Nathan’s such a straight arrow, in this particular case, he may be willing to take matters in to his own hands.”

So, what exactly does that mean? Well, General Hospital rumors have been teasing that this week on the ABC soap Judge Walters will once again deny visitation to Maxie after learning that she has still been seeing Nathan. It sounds like Nathan is going to make sure she sees her daughter one way or another though. Maybe he’ll pull a Nina and head to Seattle and kidnap Georgie for Christmas? Or, more likely he will go to bat for her and use his pull as a Port Charles Police Officer.

What do you think GH fans, will Maxie get to see Georgie? Or will Judge Walters rule against her once again? What do you think Nathan will do to make sure Maxie gets visitation rights? Let us know what you think in the comments below and don’t forget to check CDL tomorrow for more General Hospital spoilers and news.