BY Amanda Austin on May 19, 2014 | Comments: 2 comments
Related : General Hospital, Soap Opera, Spoiler, Television, The Young and the Restless 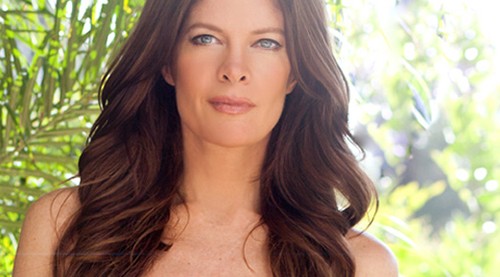 General Hospital fans were shocked two weeks ago when it was revealed that Silas Clay’s comatose wife Nina Clay is very much alive, and awake, and is being played by The Young and the Restless alum Michelle Stafford. Unfortunately, we haven’t heard anything from Nina Clay since it was revealed she is alive and awake. A General Hospital spoiler video for the week of May 19th teases that Nina may finally come out of hiding, in a semi creepy way.

We knew there was going to be some drama in the future between Nina, Silas, and Sam when Nina awoke from her coma and the first thing she did was call out Silas’s name. The spoiler video released by ABC shows Silas thanking Sam for a bouquet of flowers that she sent to him at work. Sam and Silas are both dumbfounded when Sam reveals she didn’t sent him any flowers. So, either there was a mix-up at the florist, or Nina Clay (Stafford) is in Port Charles and wants her husband back.

Nina Clay’s character will add a whole new dynamic to Port Charles, and is going to stir up a whole lot of drama, not just between Silas and Sam. It was recently announced that Donna Mills was returning to PC as Madeline West, Nina’s mother. Surely, Nina and Madeline will have some fantastic scenes together, her Mom has some explaining to do. Nina also has her faux brother Nathan West, her cousin Britt Westbourne, and her Aunt Liesl Obrecht in Port Charles. It looks like there is a whole new family in town.

So General Hospital fans, do you think that the flowers Silas received in the spoiler video are from Nina Clay? How excited are you to see Nina in Port Charles and interacting with her nutty family? Let us know what you think in the comments below, and don’t forget to check CDL tomorrow for more General Hospital spoilers.