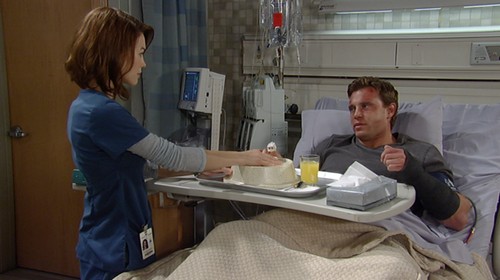 General Hospital spoilers in an all new sneak peek promo video for Thursday October 23 reveal that Jason Morgan’s identity might be revealed sooner than we thought.  When CBS soap alum Billy Miller arrived on GH, we all knew he was Jason, however the residents of Port Charles has no idea that the man Ava/Jordan hit with her car is actually their friend and loved one Jason.

In the General Hospital promo video news for tomorrow’s October 23 episode of the ABC soap, Liz Webber (Rebecca Herbst) and Jason AKA Jake, are sharing an intense moment in his hospital room, and she announces “You are not Jason Morgan!”  Recent General Hospital news doesn’t show any signs that the mystery around Liz’s patient’s identity would be revealed, so we’re a little confused how the subject of whether or not he is Jason Morgan even came up, and why Liz is so sure that he can’t be Jason.

In other General Hospital news, the mystery of Fake Luke is intensifying and Tracy Quartermaine and Alexis Davis (Nancy Lee Grahn) are on the case.  In the GH spoiler video Alexis corners Julian Jerome (William DeVry) and demands to know if he has “had any dealings with Jerry Jacks.”  Meanwhile, Tracy pleads with her son Ned Ashton to help her save Luke Spencer (Anthony Geary).

General Hospital rumors reveal that Franco and Carly’s Halloween wedding will be one for the books, and in the promo video Heather Webber demands to know if Franco is still planning to get revenge on Carly and Sonny.  Meanwhile, Sonny and Shawn continue to scheme to take down Franco, but Sonny is concerned that, “something’s not right.”

So GH fans, what do you think of Liz informing her patient Jake that he can’t be Jason Morgan?  Do you believe the General Hospital rumors that Liz and Jason wind up living together?  Recent GH news revealed that Jerry Jacks is somehow involved in the Fake Luke mystery, what are your theories?  Let us know what you think in the comments below and don’t forget to check CDL tomorrow for more General Hospital soap spoilers and news.