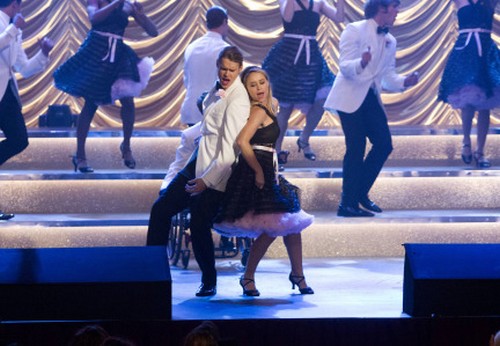 Glee returns to FOX tonight with an all new episode entitled“City of Angels.”   On tonight’s episode the glee members head to Los Angeles for Nationals with two additional guests in tow.  If you missed last week’s episode, don’t worry your little Gleek hearts, because we recapped the episode for you RIGHT HERE.

On the last episode as graduation approached, Tina, Blaine and Sam band together to hold a senior “lock-in” at school, hoping to savor their last chance at hanging out together. But their plans were thwarted when Becky joined unexpectedly. Meanwhile, in New York, Elliot (guest star Adam Lambert) was stuck in the middle between Rachel and Santana’s feud.

On tonight’s episode  the members of New Directions travel to sunny Los Angeles to compete in Nationals, and bring with them two very special guests.  Mercedes (Amber Riley) is coming back and this episode will guest star Pitch Perfect’s Skylar Astin as a member of the glee club Throat Explosion.

Tonight’s episode, like always, is sure to be a great one — and will be perfect to get you in a happy mood. So don’t miss out! Come back here tonight at 9 PM EST for your live recap. In the meantime, hit up the comments section below to let us know what you’re enjoying most about Glee season 5!

Finn has never been more missed than the lead up to Nationals. However Mr. Schuester wants to reignite that spark that Finn managed to bring out in the Glee club. That’s why he approached Sam. Sam was recruited by Finn for New Directions because Finn thought Sam had what it took to lead after he was gone. But Sam has never accepted that position until Mr. Schuester asked him to.  The team does needs a leader and Sam has to be that man.

Though Sam’s leadership starts off as a rocky…

The trip to L.A. was fun and exciting. There was also the Hummels chaperoning in honor of Finn. But the show choir drama is still pretty much the same as the years before just without Vocal Adrenaline or Blaine’s former team being the instigators. This year New Directions have to deal with Throat Explosion and their pompous leader Jean-Baptiste.

Jean-Baptiste has become something of a legend in the show choir set. At least that’s what Blaine tells his friends seeing as he’s the only one that reads those nerdy show choir blogs. And Jean-Baptiste seems to know more than his fair share about Blaine as well. What is with that? Is he flirting because he sure likes to invade Blaine’s personal space!

Maybe inviting the Hummels inviting wasn’t such a great idea. It was too soon. Finn’s mom is still grieving and it’s especially hard watching all of Finn’s friends getting nervous. She only wishes her son was around to get nervous. So Carole made a snide comment to Tina. She instantly regretted it afterwards but the comment was said. And after the kids left to go practice she had her husband there to comfort her.

Sam was really trying to inspire his team members and thought if he brought Finn’s plaque then maybe everyone would know how much their friend is still with them. Yet someone (most likely from Throat Diarrhea) took the plaque out of Sam’s suitcase. Sam was truly heartbroken about losing it but man to persevere. He reassured everyone that they need the plaque in the first place. Finn is with them wherever they go and they know he’s going to be the loudest one cheering for them.

But there is one thing that could tear up the Glee club – Marley. She hasn’t told a lot of people that she’s quitting the club after Nationals and once her allegedly closet friends find out she’s been sitting on this type of secret; they’re going to be without a doubt mad. And knowing them possibly dramatic as well.

Hopefully Ryder’s plan will stop her from abandoning everyone. Marley wants to quit because she lost faith in herself – she gave out a sample of her own carefully written song to a contest and never heard back. Now Ryder thinks if he can get a bigwig to listen to a song then maybe Marley can get her confidence back.

That’s where Mercedes Jones comes in. She’s hit it big out West. Mercedes got herself a contract with Sony Records. One of her self-made CDs was bought by a maid that worked for Kanye West who gave it to Kim who then gave it to Ryan Seacrest which led to Sony Records giving her a meeting. A meeting where she also just happened to call all the shots at.

Such a meeting like that means she has lot of pull. And if Ryder and the reluctantly  Jake have any say then Mercedes will be able to give Marley the affirmations she needs.

Mereceds met with Marley right before competition. She told Marley that she has to shake off the rejections because she does have talent. Though if she’s going to give up every time she gets let down then no one will ever know how talented she is. Sometimes you got to be brave.

It’s time for The Nationals and the completion is looking pretty tough. The first few acts opened up to great songs and an even livelier crowd. So the New Directions were nervous to begin with but to have suddenly find out that the Hummels left was a huge blow to their confidence. They so wanted Finn’s parents to be there in the audience.

Jean Baptiste and his little minions pulled off a marvelous set although there’s were done with perhaps less heart and more showmanship. While New Directions won’t have a problem with bringing their passion alive on stage. Not when they’re dedicating their entire set to Finn anyways.

The Hummels soon realized their mistake in leaving were lucky to arrive in time to watch Finn’s teams sing all of his favorite songs:

More Than a Feeling

I Still Haven’t Found What I’m Looking For

Finn was so a huge part of the club that everyone could help thinking about him throughout the set. It helped them grieve and remember Finn as they would have liked to rather than just be sad. But despite their best efforts – the judges such as a comedienne, a talented but deaf actress, and the third person simply couldn’t see how much work went into their songs.

Not that the adults are going to let winning second place get the team down. The Hummels were so proud of the tribute that told everyone that Finn would have still been proud of them. Ans they got their plaque back. Jean-Baptiste found out a team member took it and now that person has been let go. He’s bit pushy but he does have standards.

Although if Sue could have the same standards or maybe a larger heart then their defeat wouldn’t hurt as much. Sue had told Schuester earlier that she would have to cut the team if they didn’t win Nationals and this time she’s keeping her word.

The school budget doesn’t have enough to cover the arts. And Sue was sad about that but that’s the way it has to be. The band’s instruments will probably get sold off in order to buy new computers and as for the choir room – it’ll get turn into classrooms.

Kurt, Rachel, and Santana found out through the grapevine( so it sounds much worse that it is) and they know they have to go back. They have to return home to say goodbye to the club properly.