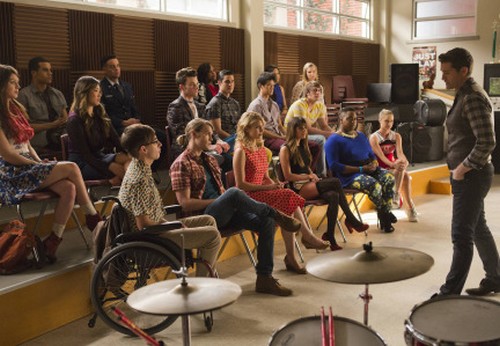 GLEE returns to FOX tonight for an exciting new episode. In “100” current and alumni members of New Directions reinvent their favorite performances in the series’ 100th episode.

On the last episode of GLEE the members of New Directions traveled to sunny Los Angeles to compete in Nationals, and brought with them two very special guests. Mercedes (Amber Riley) came back and this episode guest starred Pitch Perfect’s Skylar Astin as a member of the glee club Throat Explosion.  Did you happen to catch last week’s episode of GLEE? If not then we recapped it in detail for you right here.

On tonight’s episode Current and past members of New Directions reunite for one final assignment – to reinvent their favorite performances. But these new versions of the series’ most iconic tracks should not be seen as goodbye to glee club. On the contrary, they are celebrations of what the club has meant to each and every member.

“100” is sure to be a lot of fun and it’ll be awesome to see some old favorites come back for a return performance. Tonight’s episode, like always, is sure to be a great one — and will be perfect to get you in a good mood. So don’t miss out! Come back here tonight at 9 PM EST for your live recap. In the meantime, hit up the comments section below to let us know what you’re enjoying most about Glee season 5 and tell us what old favorites you hope will pop up on tonight’s show!

Current and past members of New Directions reunite in one final goodbye to the Glee club. There have been several near misses over the years, but this time it appears to officially be the end of New Directions and no goodbye would be worth its salt without the alumni (divas included) returning to McKinley’s for one last time. However some people might feel like they didn’t get the fan fair they were hoping for.

Both Mercedes and Rachel returned to their old stomping grounds with careers, albeit new careers, and so were expecting to be fawned over. Well, they weren’t and they were also jealous over the other one’s success.

But besides these wannabe divas, the original diva otherwise known as April Rhodes, also returned. The last anyone saw of her – she had left her old life as older men’s side pieces in order to pursue career on the stage. And though she succeeded at it; April couldn’t help falling back to old habits. She again met a rich man and this time she got an island out of it.

Her own personal island where she can enjoys the sun, the men, and the drinks. April does love her drinks and that’s why the first song she could think of to sing with Mr. Schuster was “Raise Your Glass”. Technically it was the Warblers that initially covered that song but April really liked it because it was one of the rare songs that didn’t make her sick.

Sadly for the rest of the club, they do have to stick to the assignment. The task for the week is that they each have to pick a song they had already covered and give it a new twist.

Some of the returnees – Quinn, Brittany, and Santana ended up redoing Britney Spears “Toxic”. Santana knowingly picked a song they had performed during Britney week in order to cheer up her own Brittany. Ever since Brittany got into MIT, she’s done nothing but worry and be way too overly serious. Yes, they get it you’re a mathematical genius and yet Santana could still how sad her former girlfriend was with this new career.

And when “Toxic” couldn’t cheer her up then Santana just went out and found new song. She chose “Valerie” hoping the more upbeat tune would get Brittany to remember how much she loved to dance and with the help from Mike; Brittany did finally shake off her funk.

Still the reason Toxic might be a bust could possibly be all down to Quinn’s new Wasp boyfriend. Biff McIntosh is annoying and he finds a way to demean and put everyone down. If he knew half the stuff that Quinn has pulled then he wouldn’t want to be introducing her to his “MOTHER” next week.

Biff doesn’t even know about Beth or Quinn’s tattoo. She revealed to the rest of the group that she gets her roommate to cover the tramp stamp of Ryan Seacrest with three layers of cover up.

Puckerman is so surprised about the length she’s willing to go for this guy that he pulled his own intervention. He reminded her about Beth by going over “Keep Holding On”. When they first sang that song the club did it to support after her pregnancy got her dropped from the Cheerios. But now the song has only reminded her about how much she’s forgotten.

That kind of scared some sense into her because what else will she forget along the way?

So Quinn came clean with Biff. And no surprise there, he acted like a jerk. Puckerman walked in on Biff insulted Quinn and at first he tried to let Quinn handle it herself but he soon lost patience. He beat up Biff and threw him in the dumpster.

Just like old times then – Puckerman throwing punches over a Quinn issue. He came back with a lot more confidence but certain things have remained the same. He still has feelings for Quinn!

Speaking of old times, Mercedes and Rachel wanted to do another diva off. They wanted to settle for once and for all who was the better singer. So they went with “Defying Gravity”.

The two ladies and Kurt (who was not being counted in the diva off) had to sing the song in front of the entire club and then get voted on. Although Santana, who has been having her own issues with Rachel lately, took the time to tell everyone to NOT vote for Rachel. She said Rachel was too horrible of a person to deserve it and then to be extra cruel she revealed to Rachel in front of everyone that she only won prom queen because the voting was rigged.

Rachel fled in tears and Mercedes was the one to go after her. Mercedes knows what it’s like to be around old tormentors – it makes them feel like they never left High School. Or at least that’s what Rachel does for Mercedes.

Rachel never knew that she made Mercedes feel that way and she was truly sorry that was capable of that. They returned to the classroom no longer needing to know who was better only to find out that not even New Directions could choose to between them. They received equal votes.

Personal issues aside, Will had tried to keep a certain secret under wraps. April had promised him that she could keep the Glee club around. She swore she could do this because the auditorium was still run by her very charitable company, but the two million she gave towards the running of the place had run out because it looks like Will was able to blow through all that money on production costs alone. Someone should have warned him that he couldn’t create an entire jungle scene for merely the audience of one.

And on top of that April doesn’t have any more money to donate. She completely left out the part that the boyfriend funding her happens to be Bernie Madoff. Currently all of her assets are frozen.

Will was so let down he couldn’t face her. But April had one more card up her sleeve. She brought back Holly Holiday for a final performance. No one can be sad with Holly around.

So though saying goodbye was the worst they at least got to sing Pharrell’s “Happy”. It managed to cheer the gang up and unbeknownst to them April and Holly are planning to find some way to save New Directions. They’re not going to let what has become a second home to the misfits get destroyed.

But in happier news Quinn might actually give Puckerman a second chance. So there is that if Holly and April fail.