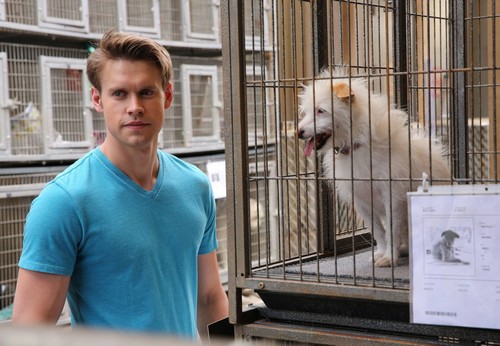 Glee returns to FOX tonight for an exciting new episode. In “Old Dog New Tricks,” as per the FOX synopsis, “Rachel hires Santana as her publicist and creates a charity for rescue animals in an effort to fix her damaged reputation. Elsewhere, Kurt stars as the title character in a production of “Peter Pan.” Series star Chris Colfer wrote the episode.”

In hope of salvaging her reputation, Rachel hires Santana as her publicist and starts a charity for animals; Kurt lands a lead role.

Tonight’s episode begins with Blaine, Kurt, Rachel and Santana talking about Rachel dumping her Broadway performances for her TV show pilots after reading bad comments about her on the blogs. The group can’t believe she’d even consider it. After Rachel is irritated to see a dog in the restaurant, she goes off on the woman sitting nearby who claimed the dog in her purse was a service dog. After she blows off some steam on the woman, she sits back down, still upset. Then she has an idea for what she needs to do to get the good publicity she desperately needs. She decides she needs a cause that will make her look good. She realizes after the dog incident that she may have found her cause.

Meanwhile, at the diner, an older woman asks Kurt to help her post a poster for a performance of Peter Pan. After Kurt confides in her and shares some frustrations, he realizes the woman he’s been talking to is Maggie Banks, a former Broadway legend. He is super excited once he realizes this. She invites him to her rehearsal to cheer him up.

Rachel wants to spearhead a benefit to make her look good, so she visits an animal shelter to get an idea about what they do. She talks the shelter manager into allowing them to go forward with the benefit. Just as they are finishing up their conversation, the dogs start going crazy and barking too loudly for anyone to hear anything. Sam grabs his guitar and the group calms the dogs with “I Melt With You.”

Rachel begins the work to organize a dog rescue charity. Rachel and Santana talk about the idea. The girls are excited about the event and are talking it up, but after Kurt asks to be a part of it and perform, Rachel and Santana say no, Kurt is upset and takes off to go see Maggie.

Kurt shows up at Maggie’s rehearsal of Peter Pan where the cast is comprised of the residents of a senior citizen home. When an elderly man playing Peter Pan is hanging from the wires to fly in, he bursts through the window, but upon seeing his body in a limp-like state, they realize he is dead. Kurt offers to fill in as Peter Pan. Kurt sings “Memory” from Cats as the entire cast is mesmerized by his voice and perfect rendition of the song. At the Maggie joins him on stage and begins singing with him. They sound amazing together as they hold hands and are slowly joined by the rest of the cast. He is officially named the new “Peter.”

Meanwhile, Sam plots to smooth-talk Mercedes when she gets home so that she is not too upset over the fact that he went back to the shelter and adopted a dog who he named McConaughey. Mercedes walks in and sees the mess that the cute pup has already created and is not happy. Same does some quick sweet talking and works on her soft side so that she’ll allow him to keep McConaughey. Just as she softens, the dog comes running down the stairs with one of her extensions. As if that wasn’t bad enough, she finds one of her favorite shoes all chewed. She screams to Sam that he needs to take the dog back where he came from.

Meanwhile, Rachel is playing along with the carefully plotted performance where she is meant to be the sweet dog walker who loves the pooches. On a fake set, she walks several dogs when she stops to talk to paparazzi about the animals and her cause. Just as she goes into the need to help these poor animals who are stuck in shelters, the dogs go crazy and get loose from her and run free. With dogs everywhere, some running, some humping innocent walkers, and one dragging Rachel away, her plan ends up being a big fail.

Kurt comes to tell Santana and Rachel about his new role as Peter Pan and asks them to come to support him. Neither are willing to come to the senior citizen rendition of the show and talk down about it. Kurt reminds Rachel of all the times he’s been there for her. He is really upset that neither of them has any intention of coming to see him perform. While Santana is pretty blunt about not wanting to go, Rachel comes up with tons of excuses. “I am doing something good for the animals,” Rachel tells Kurt. Kurt says he’s done being a friend only when it’s convenient and takes off. Rachel seems unfazed.

During rehearsal for Peter Pan, the cast is talking about the performance. Just then, Maggie is brought flowers by a staff member that are supposedly from her daughter. Her card says she can’t make it to Maggie’s opening night and offers an apology and a “good luck.” When Kurt mentions how sad that is, the staff member tells him that Maggie is the one sending herself the flowers. She does it for each performance to save face since her daughter hasn’t bothered to come visit her mom in years.

After a day of training McConaughey with Artie, singing along to “Werewolves of London” in the process, Sam goes to talk to Mercedes about his favorite puppy. Mercedes and Sam talk about what to do with McConaughey. Sam reminds Mercedes that he took care of his whole family when they needed his help and he stepped up to the challenge and was very responsible. He wants Mercedes starts to see him as capable, not just irresponsible and this is his way to prove it. Mercedes understands and says that he should still not have the dog because they won’t be able to care for him properly. He tells her that she needs to take him seriously because this is his practice and way to prove to her that one day he will be ready when they eventually get married. Mercedes reminds Sam that they won’t be able to give McConaughey the life he deserves because of their schedules and inability to spend the time he needs with him.

While Kurt’s attempts to make an appointment with Maggie’s attorney daughter go nowhere, he decides to just show up at her office. He wants her to know how hurt Maggie is that she hasn’t seen her daughter. Assuming the daughter is cold and just forgot about her mom, he begins to plead his case. Claire, Maggie’s daughter, stops him short and share the real truth about Maggie. She was so consumed by the fame that she was a horrible mother who didn’t care about her at all. She tells him to be prepared for her to lose his number when she is done with him. She shares that she should never have become a mother in the first place as she was simply too thirsty for fame. Claire shares that Maggie even missed her high school graduation. As Kurt pleads with her to come visit her, Claire opens the door for him to leave. He shares how he lost his mother at 8 and pretended for years that he still had a mother. He leaves her with some more pleas and a reminder that she still has a chance because she still has a mother. He walks out, but Claire seems to be thinking about what he said.

After a run-in with a parent who wants to adopt a dog and gets denied because it is the one Santana picked out as the perfect pooch to picture with Rachel, she is blasted by the parent. Rachel asks if she can just wait a couple hours because they need to dog for pics. The parent rages that she can see how fake the whole cause is and that she knows exactly who Rachel is and that she reads all the dirt in the blogs about her.

Getting ready for his performance, Kurt is getting ready to begin his role as Peter Pan. Kurt shares with Blaine that for the first time he feels like he is doing something with purpose. Later, Maggie approaches Kurt backstage and he asks her to become his family, knowing this might make her fill the void she has from losing her daughter. She loves the idea and hugs him. Kurt walks away feeling good about his idea and has a change of heart about his last words to Rachel. He calls her and apologizes and tells her that he is truly proud of her. She thanks him and tells him she has to go because her best friend’s performance is starting. He looks out and sees his BFF next to Blaine. She smiles and waves. The show opens with Kurt performing Madonna’s “Lucky Star” and everyone is dancing and singing along as Kurt is flying about on the stage.

Afterwards, Rachel comes to applaud the great job Kurt did and everyone is celebrating. During the performance, Maggie sees her daughter Claire in the audience and is overwhelmed with joy. When they talk backstage, she apologizes for all she’s done wrong and tells her how wonderful it made her feel for her to see her daughter watching her show. They enjoy some time together when Sam bursts in and shares that there is a bus in front. The reason for the bus is that Rachel has arranged for the cast to perform at the event for her cause, Broadway Bitches. They are all excited about performing again.

Back at the diner for her special event, Rachel announces the cause and the wonderful performances everyone can expect. They sing the most appropriate song for a pet adoption event, “Take Me Home Tonight.” McConaughey was able to find another home and it looks like the event is a success as everyone dances around with dogs in their arms.

After the awesome performance, a camera crew asks Rachel what inspired her to create such a wonderful cause. Rachel thanks her publicist Santana and her best friend Kurt for the idea and for the success of the event. The interviewer shares that they’ll be uploading the event on their site and it should garner a lot of attention!