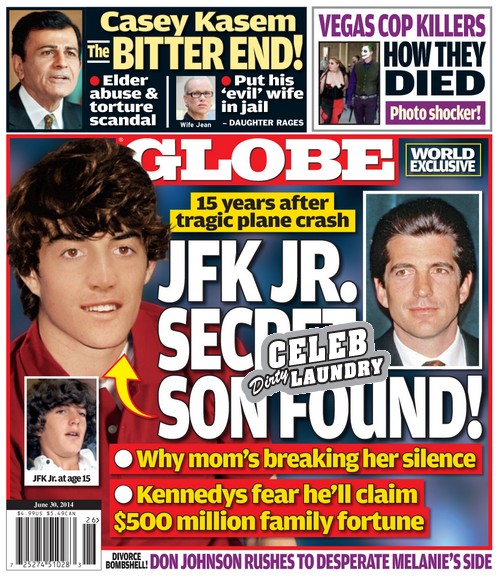 Nearly 15 years after the anniversary of John F. Kennedy Jr.’s death a new scandal is brewing and it’s the kind that could cost the Kennedy clan a fortune if true. Back in 1999 rumors were swirling around Kennedy and his wife, Carolyn Bessette’s shaky marriage. They had been seen fighting in public on recent occasions and it has been confirmed that Kennedy slept at a NYC hotel on the final three nights of his life rather than going home to the Tribeca apartment that he shared with his wife. There were rumors of an affair and now according to the June 30th print edition of GLOBE Magazine Kennedy may have fathered a love child. The 15-year old boys’ mother has come forward to tell her story of her alleged affair with Kennedy and it is making his family more than a little uneasy.

The Kennedy clan is very concerned that if a DNA were to actually link this boy to Kennedy then he could lay claim to the $500 million family fortune! The question is whether or not the claim is legitimate but given the circumstances in Kennedy’s marriage back then and the fact that Kennedy men are known to stray, well and affair seems more probable than shocking, doesn’t it? If he left behind a son that would certainly add a real twist to the family fortune wouldn’t it?

A lot of people were saddened by the death of Casey Kasem last week. He was one of the few voices left from a dying era of radio and his contributions are beyond legendary. His family was at war over everything from his care to his millions over the last 6 months and it’s not a fight that will die with Casey. His daughters have accused his widow, Jean Kasem of elder abuse and GLOBE magazine has all of the details on the accusations that are flying against her.

Last week a married couple with no respect for the law shot and killed two police officers in Vegas before dying themselves. The June 30th print edition of GLOBE Magazine decided to take a closer look at who they were and what motivated their horrific actions. Grab the latest issue of GLOBE to learn more about how this situation really ended in Vegas and in the meantime tell us your thoughts on Kennedy. GLOBE get right to the heart of this Kennedy scandal and exposes every detail for their lucky readers. Imagine the consequences once the world learns the inside story of how JFK Jr. was he cheating on Bessette at the time of their death.