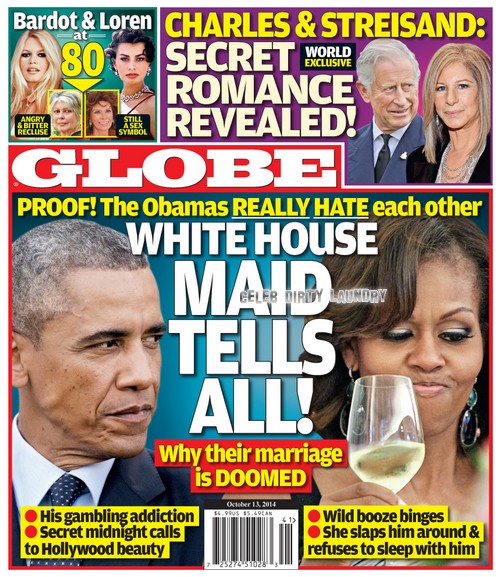 Buckingham Palace is an exquisitely large piece of real estate, of course the Royal family needs every square foot of the castle to hide all of the skeletons in their closets. Rumors have emerged on more than one occasion that Prince Charles had an affair with the legendary Barbra Streisand, and it looks like there is truth to it.

The October 13th edition of GLOBE Magazine announces “Charles & Streisand: Secret Romance Exposed! World Exclusive.” Seeing as how Prince Charles is notorious for his scandalous cheating on Princess Diana, we’re not exactly surprised that Camilla Parker-Bowles wasn’t the only “other woman” in his life. Camilla Parker-Bowles is losing her mind over the revelation of Prince Charles and Barbra’s romance – of course as GLOBE reported last week Queen Elizabeth is already bribing Camilla to divorce Charles and leave the UK so this should help Camilla to accept the monarch’s offer. We also know that Kate Middleton has banned Camilla from her family so she too will be happy to see her mother-in-law leave. A

s always, GLOBE Magazine tackles some of the most exciting and elusive topics in the gossip world, and finds exclusive sources to tell all. Perhaps if Prince Charles had stuck with Barbra Streisand instead of marrying the wretched Camilla Parker-Bowles, Queen Elizabeth would be more willing to hand over the kingdom to him. Can you imagine Barbra Streisand as the next Queen of England?

This week GLOBE also tackles a controversial subject, and has a special story titled “Whitehouse Maid Tells All,” in which an exclusive source dishes on Barack and Michelle Obama’s private lives.

We can’t wait for this week’s GLOBE Magazine to hit the newsstands so we can get all of the juicy details about Prince Charles’ affair with Barbra Streisand. Do you think that Prince Charles should have married Barbra Streisand instead of Camilla Parker-Bowles? Or did Queen Elizabeth actually hate Barbra more than she hated Camilla? Check CDL later this week for our extensive reports on the GLOBE stories, and let us know what you think in the comments below!