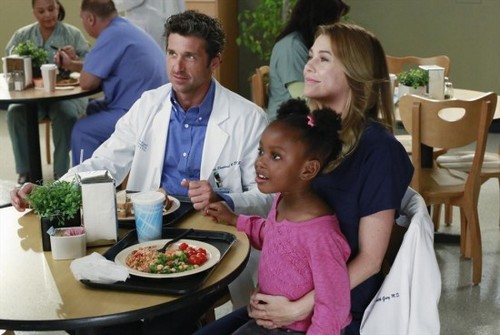 Tonight on ABC Grey’s Anatomy returns with a great all new Thursday October 2, season 11 episode 2 titled “Puzzle with a Piece Missing.” On tonight’s episode, Maggie tries to prove her worth and befriend others at the hospital, but she lands in some bad predicaments. Meanwhile, Richard doesn’t want to disclose his secret; and the doctors assist a dying woman whose daughter won’t let her go.

On the last episode, with Cristina gone, a new doctor, Maggie Pierce (Kelly McCreary), made the rounds and Derek wanted to move to Washington DC, Meredith struggled to regain a sense of normalcy both at home and in the hospital. Meanwhile, Callie and Arizona came to a decision about surrogacy, Amelia overheard a big secret, Bailey realized she will have to fight Alex for Cristina’s board seat and a freak accident caused two teenagers to be caught in a very compromising position. Did you watch the last episode? If you missed it, we have a full and detailed recap right here for you.

On tonight’s episode in this Maggie centric episode, she continues to try to make a positive impression at the hospital but finds herself in extremely unfortunate situations. Meanwhile, Richard continues to hold onto his secret and the doctors work with a dying woman who is being kept alive by her daughter.

This episode looks like it is going to be a great episode and you won’t want to miss it, so be sure to tune in for our live coverage of ABC’s “Grey’s Anatomy” Season 11 episode 2 at 9 PM EST! While you wait for our recap hit the comments and let us know what you think about season 11.

Tonight’s episode of Grey’s Anatomy begins with Maggie Pierce on the phone with her parents in the breakroom, she hears alarms going off and hangs up and rushes to her patient’s room, she’s flat-lining. She rushes in and performs CPR and is able to save her life, her daughter sobs and thanks her. After an awkward run-in with Meredith and Dr. Webber at the elevator, Maggie heads out on her rounds with Jo. First stop is a patient named Robbie trying to pass a kidney stone. Maggie is afraid that the size of the stone could cause him to go into cardiac arrest.

Next, Maggie and Jo check on Rita, she is thirty-five weeks pregnant, and on bed-rest. She is at high-risk pregnancy and the child will have to have emergency heart surgery when she is born. Rita also has a heart defect and having the baby will kill her. Next they check in on the elderly woman named Margie who Maggie just saved, she has stage four lung cancer and it is spreading to her liver.

She pleads with Maggie to “just let her die” if her heart stops beating again. She complains that she is tired of being in the ugly room with ugly machines and taking drugs that are killing her memory. Her daughter won’t let her sign the do-not-resuscitate papers. Afterwards, Jo corners Margie’s daughter and tries to tell her that her mother is in serious pain. Genie cries that they are her doctors and they have to save her. Afterwards, Maggie yells at Jo and tells her that she isn’t allowed to talk to patients.

Maggie gets reports for kidney stone patient Robbie, she asks Miranda to run a test on him to determine if his condition is genetic for her research. Miranda happily agrees to run the test, even though they closed the geno lab, Jo warns her that she isn’t supposed to. Maggie and Jo head back to pregnant Rita’s room and she is writhing in pain from her backpain.

Alex pages Maggie to come in for a consult on a patient he is performing surgery on. Maggie congratulates Alex on getting a position on the board, Alex tries to get her to stop talking but it is too late. Oliver overhears her and freaks out on Alex and asks him if he is leaving the practice, Alex confesses he might be. Oliver tells him he can’t quit, because he is fired. Maggie sees the altercation and storms out and tells her she is “off her service” she refuses to work with her because she realizes that it was supposed to be a secret Alex got on the board.

Maggie heads to the cafeteria and runs in to Meredith and Derek and their daughter Zola. Maggie congratulates him on his new job in DC, but they reveal that he didn’t take a job. Maggie excuses herself and sits down with Dr. Webber. Now she feels guilty that thought Meredith was such a horrible person, because she adopted an African orphan. She wonders if she should give Meredith a second chance, and Webber encourages her to talk to her about being her sister.

Maggie rushes to see Arizona and says it’s an emergency. They rush to Rita’s room because she is having an aortic dissection and needs emergency surgery before she dies. She cries that it is dangerous to deliver the baby so soon, her husband freaks out and screams at her to stop worrying about the baby. Maggie takes her husband Eric out of the room and tells her that he needs to be supportive, he confesses to her that he begged Rita not to have the baby because he knew it could kill her. They rush Rita off to surgery to perform an emergency c-section. Once the baby is out, Maggie and Jo perform the heart surgery. Maggie finishes and rushes in to the other room to check on Rita’s baby and Arizona announces that she is flat-lining. Arizona and Maggie work together to perform heart-surgery on Rita’s baby.

Amelia calls Maggie down to the emergency room, and a girl in her twenties is having a stroke. A man brought her in because they were having sex and she just started having a stroke. He has no idea what her name is because he met her at the gym and she doesn’t have an ID. Maggie leaves and chases down Meredith and is lecturing her about the chain of the command, they are interrupted by a huge singing man in a costume in the lobby. Her parents sent her a super embarrassing music-gram. Maggie heads outside to call her mom and cries that she thinks it was a mistake coming here and she doesn’t feel like she can be herself.

Meredith and Amelia sit down and try to figure out why their mystery patient had a stroke. They realize that she had a blood clot in her leg and during sex it traveled up to her heart and her brain, and paralyzed her. While Maggie is performing her surgery on the stroke woman, Jo runs in and interrupts and says that Dr. Bailey has news for her in the geno lab. They realize that Robbie’s heart condition is genetic and she sits down with Sabina and her husband to discuss the genetic defect, they are relieved that it is not something they did.

Maggie receives a page that her elderly patient Margie is flat-lining again. She rushes in to the room and Meredith is performing CPR. She pushes Meredith out of the way and says she is doing it too hard, and begins doing CPR very slowly. Meredith yells that Maggie is letting her die, but Maggie ignores her. After a few minutes Maggie calls time of death and Meredith storms out of the room disgusted.

Meredith runs and tells Owen that Maggie slow-coded a patient right in front of her. Maggie argues that she did everything in her power to save the patient. She chases after Meredith and tells her that Margie begged her to let her die but her daughter wouldn’t sign the papers. Maggie tries to tell her daughter that her mom died, but she got choked up so Meredith told her for her.

Eric visits his wife Rita after her surgery and reveals to her that their daughter is alive and well. After her shift is over, Maggie runs in to Jo and Jo insists that she wants a second chance to learn from her, Maggie agrees and says she will see her in the morning. As Meredith is leaving the hospital, Maggie chases her down and says “my mother is Alice Grey.” She explains that she was put up for adoption in Boston. Meredith tells her she is lying and she would have known if her mother was pregnant and storms off.