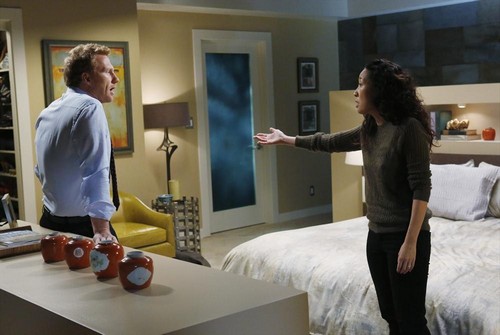 Tonight on ABC GREY’S ANATOMY returns with a great new episode. In “Do You Know?”  Cristina envisions two different scenarios for her life based on one crucial decision she faces. Meanwhile, a patient decides whether to live or die.

On last week’s episode it was Richard’s birthday and Bailey invited him to scrub in on the case of a lifetime. Meredith hired a research assistant to help with her portal vein project, and a scorned Callie gave Derek quite the shock. Meanwhile, Shane helped screen candidates for Cristina’s clinical trial and met a young expectant mother (Keke Palmer) who needed his help.

On tonight’s episode Cristina imagines the two routes her life can take based on one decision she makes. Meanwhile one of the hospital’s patients decides whether or not to live.  The show guest stars: Anne Dudek as Elise Castor and Charlie Hofheimer as Jason Castor.

Tonight’s episode looks like it is going to be a great episode and you won’t want to miss it, so be sure to tune in for our live coverage of ABC’s “Grey’s Anatomy”Season 10 episode 17 at 9 PM EST! While you wait for our recap hit the comments and let us know how excited you are about the season so far.

You win some, you lose some. No better idiom describes Cristina’s situation right now. She just saved her patient’s life but despite fixing his heart he’ll never be able to breathe on his own much less walk. So his wife told Cristina that her husband needed to be woken up from his chemically induced coma because she knew in her heart that her husband wouldn’t want to live like this. And though Cristina was apprehensive; she followed the wife’s orders.

When Jason Castor came to and was told about his condition then his answer came easily to him. He informed Cristina several times that he would rather die than live this way. His wife, Elise, had told him that she would stick by him no matter what, but she was right t about her husband. He didn’t want to live like that and he wasn’t going to subject his wife to either.

Though Jason’s decision proved to have a larger impact than even he would have ever guessed. After Cristina watched him essentially give up she then thought about her own life. What would happen if she chose to go back to Owen? They’ve been dancing around the possibility for a while now and so far no one has pushed for a decision. So Cristina thought about what if.

What if she went back to Owen and the answer is she would be happy, but not for long. The same problems that ruined their marriage the first go around would only pop up again.

She would consent to getting married and moving into a big house. Then they would get a dog as replacement for the children she still didn’t want to have. And soon Owen would yet again start questioning why he can’t ever have what he wants. Be it either a possible job away from the hospital or kids.

So eventually Cristina would find herself compromising on something and in the scenario she’s dreamed up it would be kids. The very same woman that planned at least two abortions on the show and who has gone through one of them would then find herself someone’s mother. And just like she always figured she won’t have it in her to love her child the way she knows she should because she can’t be a mother and a surgeon at the same time.

Other women have done it, but Cristina has always known whether it came from an irrational fear or not that she would have to give up something.

When she gave up her career to be a mom she came to resent it. However she hid it from her husband. Cristina knew that Owen was happy and that kept her going. Right up until she saw Shane’s career flourish because Cristina also knew was that her intern was going to do great things, but to have him surpass her was the straw that broke the camel’s back.

Going back to Jason’s choice. If he had chosen to live would it have been different for Cristina? If she thought she preserved someone’s life then it could have instilled in her that her job has a purpose. And that she shouldn’t give it up even for Owen.

They would give their relationship another chance and there would be both the bad and the good. Same fights with only one new addition – Jason would continue to be a patient. He and his wife would try to go through clinical trials (even though he simply wants to give up and his wife becomes tired of being his nursemaid) and Cristina would distance herself from them. If he doesn’t have a problem with his heart then it wouldn’t be in her field and so she would spend most of her time on her research project where she would feel her time be more valuable spent. Leaving Owen to think she’s cold.

In this position, he would come to resent her and being around her. They would continue their nasty cycles of breakups and makeups!

Owen wanted the kids and the house and ultimately he wouldn’t get that with Cristina if she chose her career. It’s sad, but someone always was bound to be bitter if these two stayed being around each other. And if it wasn’t Cristina in a marriage then it was Owen getting pushed aside. His career would falter and instead of Shane being the one that was honored all of the accolades would go to Cristina.

Thankfully these are only what ifs Cristina has thought up.

What really happened once Jason chose to die was that Cristina never got the chance to make the biggest mistake of her life. She stopped Avery from injuring himself and Meredith had side tracked her from going after Owen. And yet someone still has to make a choice in their relationship and they need to do it soon.