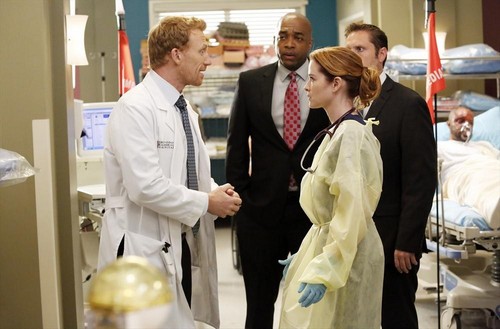 Tonight on ABC GREY’S ANATOMY returns with a great new episode titled “Fear (of the Unknown),” In the 10th-season finale, Cristina’s coworkers give her a fond send-off. Meanwhile, a possible terrorist act occurs in Seattle and leads to pandemonium at the hospital; Meredith makes a life-altering choice; and a doctor gets alarming news.

On last week’s episode with Derek away, Meredith spends time with Amelia and finds out her true feelings about her time in Seattle. Bailey deals with the ramifications of her actions and Callie receives devastating news. Meanwhile, the residents panic after hearing that one of them will be fired.  Did you watch last week’s episode?  If you missed it we have a full and detailed recap, right here for you.

On tonight’s episode In the Season 10 finale, the doctors of Grey Sloan Memorial Hospital bid an emotional farewell to the beloved Cristina Yang. A possible act of terrorism rocks Seattle and causes chaos at the hospital. Meanwhile, Meredith makes a life changing decision and one doctor receives shocking news.

This episode looks like it is going to be a great episode and you won’t want to miss it, so be sure to tune in for our live coverage of ABC’s “Grey’s Anatomy” Season 10 episode 24 at 9 PM EST! While you wait for our recap hit the comments and let us know what you think about season 10.

The reason why Cristina’s goodbye feels like its being drawn out is actually because of Cristina. She is the one dragging her feet on leaving. She originally said she wanted to stay for the last McNeil transplant and every time a heart appears available – something falls through. But Cristina can no longer afford to be this sentimental. She has to be in Zurich by a certain time or else look like she’s flaking on a new job.

And not to hurt her feelings, but some people are glad she’s going. The new doctor heading up the cardio unit, Maggie, doesn’t like Cristina. She finds the other woman to be bossy when officially Maggie is Cristina’s new boss.

As for Meredith, she thought she could solve the Derek problem seeing as there was nothing she do about stopping her best friend from leaving for Zurich. However Amelia is finding it hard living in Derek’s shadow. It’s not easy filling in the her brother’s shoes at the hospital. Most of the doctors don’t even know what to call her though she made it clear to never refer to her as Derek’s little sister.

A little bit touchy, but somewhat understandable. Unfortunately there is just no time for anyone to be having a complex right about now. A suspected terrorist attack took place in Seattle – a bomb went off at the mall. The very same mall that Cristina told Owen she wanted to stop by for some quick shopping.

Owen was so worried about her and yet he only filled in Alex. And even then they both knew not to tell Meredith. She was bound to freak out by the news and as it turn out it would have been for nothing.

Cristina ended up coming by the hospital, healthy and uninjured, to help out with the influx of bombing victims.

Leah also showed up to see if she can do anything. Lately she’s been eating ice cream off her couch. But when needed, she decided to put away her own distress in order to do some good. Which she did. Shane was struggling with a patient when she swooped in and saved a man’s eyesight.

Although she was told she didn’t have what it takes to be a surgeon that doesn’t mean she can’t also be a capable doctor.

While she was with her patient, Leah thought she spotted a boy reported missing, but it wasn’t him. The boy is the child of April’s patient and she’s desperately trying to find a way to reassure her patient even as the search for the missing child starts to look grim.

Her pregnancy has made both April and Jackson emotional. It has Jackson getting teary eyed at the delivery of a preemie and it has April hiding out in the closet – unsurprisingly crying her eyes out.

And that’s where Catherine found her. They had just heard over the news that the bomb was in fact a pipe explosion. So the agents that were investigating (harassing) a Middle Eastern abruptly left because life should be returning to normal. At least according to them. As for April, she’s more worried about how quickly everyone just assumed a bomb had gone off. It made her feel like “what kind of world is this” and how can she raise a baby in it.

Catherine comforted with the fact that world has always been hard, but the answer isn’t to hide from it. You simply have to be stronger and though the two haven’t been what we would call close – Catherine still gave April what she needed.

Cristina found a heart for Link McNeil and she scheduled him to come in on what is literally her last day. So Meredith called “enough”. She knew her friend was stalling out of fear so she pushed Cristina. By then she had to or else her bestie would have stayed on forever.

No longer having a choice made things easier. Cristina finally worked up the courage in saying her goodbyes and in one case there was an interesting twist – Shane asked to go with her. Cristina was resilient, but Shane was overwhelmingly convincing.

So Cristina is taking that job overseas and as a last minute goodbye she waived to Owen during his surgery and danced it out with Meredith for the very last time.

Cristina has imparted some last minute wisdom. She told Meredith to think of herself – don’t just follow Derek without thinking about the repercussions. And Meredith took that advice. She told Derek that she’s staying. She’s not going to walk away from her family’s legacy because he decided yet again to be the hot shot doctor. Meredith told her husband that she’s not that intern anymore.

Meredith doesn’t want to leave Seattle because that’s home and its where she lost her loved ones. But if the newest doctor is to be believed then Meredith has another reason to stay in the city. Maggie told Richard in confidence that she came to hospital after learning her birth mother was Ellis Grey (Meredith’s mom). Though what Maggie doesn’t know is who her father is nor can she guess that she’s most likely currently talking to him.

If that bomb wasn’t big enough to impress then how about the fact that Cristina left all her shares to Alex. She wanted him to come back to the hospital and found a way to outmaneuver any objections.

Alex and Bailey (she won hers through acknowledged hard work)now have a place on the board so just imagine what the meetings will be like next year.