Gypsy Sisters RECAP 1/2/14: Season 2 Episode 8 “The Family That Plays Together, Stays Together” 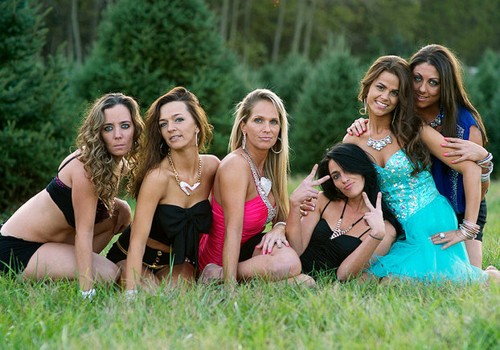 Tonight on TLC GYPSY SISTERS continues with a brand new episode.  On tonight’s show called, “The Family That Plays Together, Stays Together” a visit to an animal park proves this group is wild.  Did you watch last week’s episode?  We did and we have a full and detailed recap, right here.

On last week’s show after countless false alarms, Mellie finally went into labor. As a last ditch effort, a remorseful Nettie decided to send Kayla a DVD, pleading for forgiveness. Later, Annie and Sheena helped Kayla prepared for the chili cook off.

On tonight’s show after viewing Nettie’s apology video, Kayla agrees to meet with her. They decide a road trip is just the thing to unite the family. Along the way, a visit to an animal park proves this group is wilder than the park’s inhabitants!

Tonight’s episode is going to be another drama packed one, which you won’t want to miss. So be sure to tune in for our live coverage of TLC′s Gypsy Sisters Season 2 Episode 8 at 9PM EST! While you wait for our recap, hit the comments and let us know how excited you are about the new episode of Gypsy Sisters tonight.

Tonight’s episode of Gypsy Sisters opens with Kayla, watching the DVD that Nettie sent to her.  She shows Nettie’s movie to her sister, and admits that she is truly moved by Nettie’s DVD.  She heads outside and gives Nettie a call.  Nettie is shocked to hear from Kayla, and she apologizes again on the telephone.  Kayla wants Nettie to meet up with her and talk to her in person so she can see if she really changed.

Mellie and Baby Richard are at the photographers picking up her pregnancy photos.  She is shocked by the pictures and can’t believe how much she looks like a “fat cow.”

Nettie is at the nail salon with some of her daughters spending quality time.  Mellie joins her with Baby Richard, and Nettie reveals to her that she is going to meet up with Kayla.  Mellie is scared that Nettie is going to “punch Kayla in the face again.”

It’s the day of the big meeting.  Kayla is on her way to meet up with Nettie.  It is the first time Kayla has seen her face to face since Nettie attacked her last summer and they got into a huge physical fight.

Kayla arrives at the pub, Nettie is patiently waiting for her.  Nettie jumps right in and starts apologizing, but Kayla isn’t ready to let go of the fight so easily.  She is hurt that Nettie’s whole family jumped in and tried to jump her, she was seriously scared for her life.  Nettie recommends that all of their families hit the road and travel to Tennessee together on a vacation.

Meanwhile Mellie and her sister JoAnn are at the tattoo parlor.  Mellie is getting her son’s father Robbie’s name tattoo covered up with a set of brass knuckles.

Kayla heads home and invites Scheena and her sister on a road-trip with her and Nettie.  Scheena isn’t exactly thrilled about the road-trip, she thinks it is a “recipe for road-trip.”

The next day Scheena, Nettie, JoAnn, Kayla, Mellie, and some of their daughters pile into an RV and head for Tenessee.

Day #1 of the road-trip is already off to a rocky start.  Nettie and Kayla are wrestling, and Nettie accidently rips Kayla’s underwear.  Mellie is screaming at everyone because they are going to wake up Baby Richard.  They make a pit-stop at a store with a huge pink elephant outside so the kids can take their pictures with it.  Mellie refuses to get off the bus and participate.  Later that evening they finally arrive at the hotel.

Day #2 of the road-trip arrives, and the girls pile back into the RV.  Mellie is shocked when she receives a phone call from her ex Robbie, he wants to see Baby Richard.  She tells him he isn’t allowed to see him, but Nettie takes the phone from her and makes arrangements to meet Robbie in Tennessee.  Mellie is irate that Nettie made that decision without her.

Nettie, Kayla and the rest of the girls finally arrive at the cabin they rented in Tennessee.  Everyone rushes in to check out the rooms.  Mellie sits in the RV with the baby and refuses to come inside.  Mellie hates the woods and she thinks the cabin is creepy, she’s afraid there is murderers hiding inside.  After a few hours JoAnn manages to convince her to come inside.  Nettie reveals to Mellie that she talked to Robbie and gave him the address of their cabin.  Mellie is not happy.

The next day the girls head to a safari with their kids.  None of them have ever been to a safari and they are excited to see the animals.  Mellie is already complaining, she doesn’t want to ride on the truck out into the safari trail because she is scared of bears and snakes.  Mellie quits being a drama-queen and participates in the camel rides.

Nettie and Kayla are both happy with their road-trip so far.  They think that their time in Tennessee is really helping them get over their differences, and rebuild their friendship.