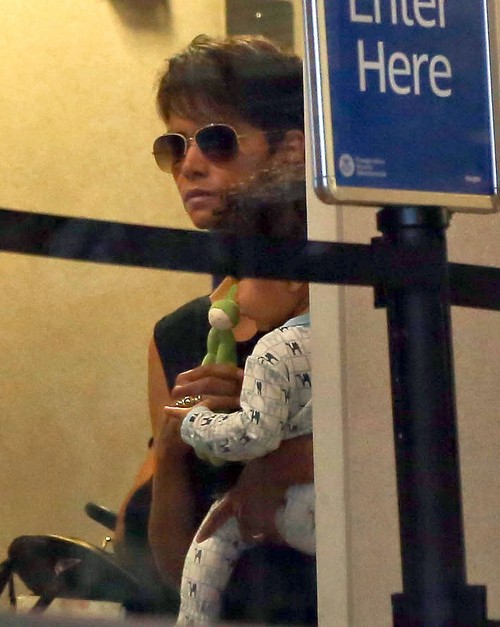 Halle Berry and her French hubby Olivier Martinez have been married for over a year now, after they tied the knot Halle gave birth to their son Maceo, who is now ten months old. At one point Halle and Olivier were the talk of the town and destined to become the next super-couple, however shortly after Maceo was born the newlyweds slipped out of the limelight and were rarely seen together. According to the August 25th edition of OK! Magazine, the reason that Halle and Olivier are no longer seen together is because they are living completely separate lives and on the verge of a divorce!

OK! Magazine claims that, “They’ve been married just a little over a year, but things are already falling apart for Halle Berry and her husband French actor Olivier Martinez – and career friction seems to be a major reason. Rumors of trouble began in March when Halle Berry was hard at work shooting her new CBS series Extant in Los Angeles. An insider says that Olivier barely visited his wife on set, even though he had plenty of time to do so.”

According to OK! Magazine’s inside source, “The spark they once had has burned out. The whole family was supposed to go on a make-or-break holiday, but that fell apart because neither Halle nor Olivier wanted to make it happen. They are drifting apart and only get together for the sake of Maceo. They’re just delaying the inevitable – announcing their split.”

Ironically the CBS series Extant that Halle spent most of her marriage to Olivier Martinez filming, has turned out to be a huge flop, bringing in dismal ratings and rumored to be cancelled by CBS. Do you think that Olivier Martinez and Halle Berry are solid, or do you believe the rumors that it is only a matter of time until they announce their split? Share your thoughts and theories in the comments below!

‘Extant’ actress Halle Berry departing on a flight at LAX airport in Los Angeles, Halle was without her 48-year-old actor husband Olivier Martinez and her six-year-old daughter Nahla from her previous relationship with Gabriel Aubry. Also a couple of shots from Halle’s appearance with David Letterman.