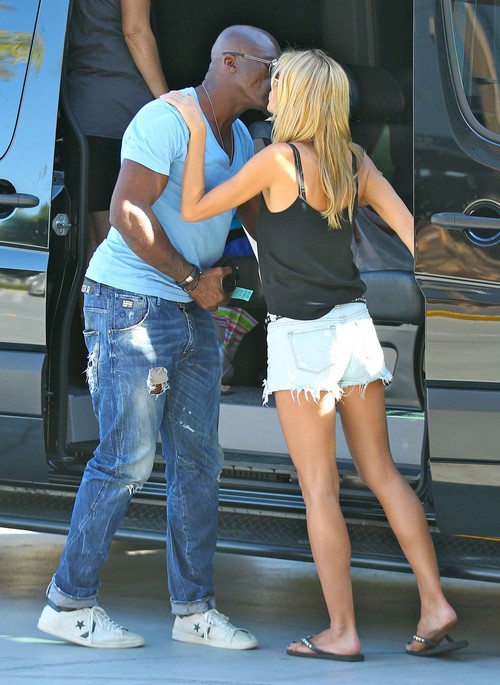 Is Heidi Klum starving herself for love? Well, according to the October 20th edition of Star magazine, Klum is down to 115 pounds and desperately trying to keep her slim figure in check so that she doesn’t lose her playboy boyfriend Vito Schnabel to a younger and skinnier model. At a whopping 5”9, 115 pounds is far from a healthy weight for the mother of four.

Star Magazine’s inside source reveals, “Vito hangs out with 18 year old models and it makes Heidi insecure. She thinks that the thinner she is, the hotter she is.” The source goes on to explain that between raising her four kids, working on America’s Got Talent and Project Runway, and trying to party every night and keep with Vito, Heidi is an exhausted mess.

We’re not exactly buying the tabloids claims though. Heidi Klum was just photographed last week and appeared to be the picture of health, and definitely wasn’t super skinny or anorexic looking. And, our sources have confirmed that Heidi is reconciling with her ex Seal, and the two have been spending a lot of time together on outings with their four children, and were spotted kissing and holding hands. Insiders at their kids’ soccer game even revealed that one of their children was bragging to her playmates that Seal was living in their house again.

Heidi Klum doesn’t strike us as an insecure woman starving herself to keep a man. She’s Heidi Klum, can’t she have any man she wants? And, we’re not sure when she has time to party with Vito Schnabel every night, if she is spending all of her free time with Seal and their children. Are you buying Star’s starvation story? Or do you think Heidi is getting back together with Seal and Vito is old news? Let us know what you think in the comments below.