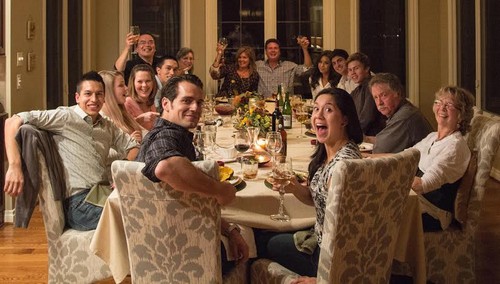 Superman has terrible taste in women, ya’ll. And now, we don’t mean Lois Lane. 31-year-old Henry Cavill was dating Gina Carano, but has apparently split with her over reasons that are not yet known to us. However, just like last time, it didn’t take him long to move on. But this time, instead of moving on with a fame-hungry TV star [hi, Kaley Cuoco], Henry Cavill is instead dating a barely legal 21-year-old ‘animal killer’ named Marisa Gonzalo.

There’s no word on how or when Henry Cavill met this Marisa Gonzalo, but there are social media pictures confirming their association with each other. There are also VERY incriminating pictures and social media tweets concerning Marisa, and it’s a bit worrying that Henry – who considers himself an animal lover – would be dating someone who is so blatant about killing animals and bragging about it to everyone who will listen.

There are pictures of Marisa posing with dead deer, not to mention a disgusting tweet reading, “I love squirrels. One summer I killed so many of them.” Even if she’s being ironic, this isn’t funny. It’s not funny to pose with dead animals, and it’s not funny to tweet about killing animals. Either this woman truly has a truly terrible sense of humor, or she’s just a horrible person. And in that way, Henry Cavill has the WORST taste in women, doesn’t he? Kaley Cuoco might have been a wonderful person on the inside, but she totally used him for PR purposes. And then, he gets back together with Gina Carano, disappears from the limelight, and we all had hope for him again. But alas, that hope has now been shot down in the most brutal way possible, in the shape of 21-year-old crazy. We were rooting for you, Henry, we were rooting for you. How would Lois Lane feel?

What do you guys think about Henry Cavill’s new girlfriend? Let us know your thoughts in the comments below.