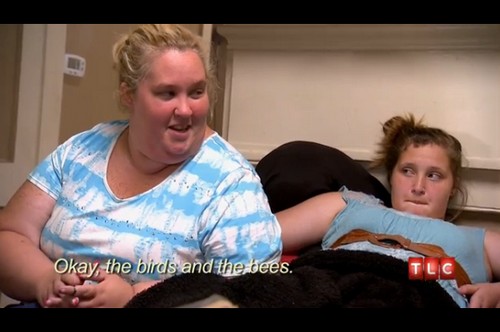 Tonight on TLC their popular and zany reality show HERE COMES HONEY BOO BOO continues with another new episode called, “The Birds and The Boos.”  On tonight’s show June decides to talk to the girls about the birds and the bees and you can imagine the insanity that ensues!  Did you watch tonight’s premiere episode?  We did and we recapped it right here for you.

On tonight’s premiere episode Sugar Bear decides he needs some man space so he gets a Man Camper, or Manper. While Sugar Bear enjoys his Manper, Pumpkin primps the girls with waxing and blackhead removal. But the family reunites for a trip to the Redneck Games.

On tonight’s episode Anna and Jessica have boyfriends, and June is not ready to be a Grandmother (again). June and Sugar Bear each have painfully awkward sex talks with the older girls and their boyfriends. Meanwhile, Alana is feeling left out and needs a new hobby.  It all starts out like this, June tells the girls, “A girl meets this boy, they fall in love … and the boys try to get in girls’ fruit loops.”  You can imagine what goes on from there.

Tonight’s episode looks like it is going to be another crazy Thompson family episode and you won’t want to miss it, so be sure to tune in for our live coverage of TLC’s “Here Comes Honey Boo Boo – The Birds and The Boos” at 9:30 PM EST! While you wait for our recap check out a sneak peek of tonight’s episode below!

During the next epsiode, the kids are out of school and Honey Boo Boo is up early, ready to start her summer. She tries to wake up her sisters to play with her, but none are interested in getting out of bed, not even baby Kaitlyn. Honey Boo Boo decides to go outside and soon finds a confidante in her dog, Cha Cha. She says she’s got to find something to do and tells Mama June she wants to try cheerleading. Mama June agrees to let her try it. Next, Anna and Jessica are hanging out on the porch with their boyfriends and the baby. Then they move to the living room where Anna serenades her boyfriend Michael with a series of burps. Pumpkin later shares that she thinks Michael is a “bitch” and that Phillip, Jessica’s boyfriend, is “stupid.” She says that her sisters “don’t need to be worrying about no boyfriend right now.” Mama June shares that while Jessica and Phillip have been together for over a year, Anna usually gets bored with her relationships after two or three months, so she’s not sure how much longer Michae’ls going to be around.

It’s time for Honey Boo Boo’s first day of cheerleading camp and she’s really excited, but also nervous. During the first part of the class, Alana learns how to stretch, which she doesn’t really care for. Soon it’s time to learn a dance, and Honey Boo Boo comes to life. Her cheer camp instructor shares that Honey Boo Boo needs to work on her rhythm but that she was doing great otherwise. Then it’s time for a birds and the bees talk between Mama June, Jessica, and Anna. Mama June explains that boys try to get in girls’ fruit loops, which is the name she uses for a woman “vaginial area.” After Jessica explains where the term “the birds and the bees” comes from, Mama June’s had enough of the sex talk so she announces she’s going to the bathroom to poop.

The next scenes features Sugar Bear having his own sex talk with Jessica and Anna’s boyfriends while he cleans his grill. He then inquires about how far the boys have gone with his daughters. Sugar Bear asks Michael and Phillip what their definitions of 1st, 2nd, and 3rd base were, and after establishing what they thought, Sugar Bear tells them not to go past 2nd base. He warns them to always be respectful and not to hurt them. Next, Mama June talks more with Anna about the birds and the bees, during which Mama June advises her daughter to be careful about having boys around baby Kaitlyn. For once, Mama June speaks true words of wisdom as she warns her daughter about the effects of having different men in and out of her life could have on Kaitlyn one day. The talk is mixed with light hearted jokes as always, but Anna appears to be taking in Mama June’s advice.

As the second half of the season premiere draws to a close, Honey Boo Boo gears up for her final performance at cheer camp. Honey Boo Boo says she is excited for the day’s performance so she can show her family how good she is. The performance ends with Honey Boo Boo “working it” in the group dance. Since the cheer camp experience was a success, Mama June decides that more cheer and dance classes may be in Boo Boo’s future.