Hilary Duff Back Together With Mike Comrie: Reconciled Couple Spotted Getting Close At Hollywood Halloween Party! 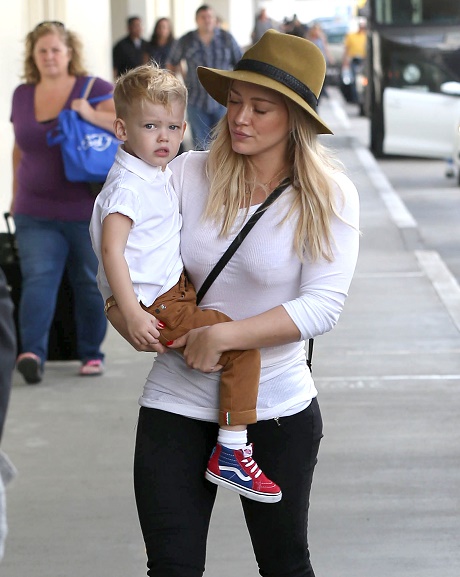 Hilary Duff is back with Mike Comrie one minute, and they’ve broken up the next minute. Now, they’re reportedly back on. It’s gotten to the point where you just want to put them in a room together, and tell them to work it out already.

Hilary and Mike went to a Halloween party together in Beverly Hills on Friday, and they were photographed holding hands and walking into the party together. This is just me, but I don’t think holding your hands with your ex-husband and walking into a crowded party signifies that you’re single, no? Hollywood parties are prime stomping grounds for single actresses, and if Hilary is or was single, she’s definitely not acting like it.

In fact, it seems to be pretty obvious that Hilary and Mike have been tentatively back together for a few months now. After all, they co-parent their son, Luca, and spend almost all their free time together. They spent Valentine’s Day together, they go on vacations together, and they were spotted acting very couple-y during the Coachella music festival. In other words, they are acting like two people in love, not two people who are estranged and trying to get along for their son’s sake.

Sources close to Mike Comrie and Hilary Duff have also confirmed that the couple is giving their marriage another try, even though they’re not willing to go public with their romance just yet. At a certain point, acting like a couple is bound to rub off on your behavior, no? There’s only so long they can pretend before their feelings turn real, if they were ever pretending to begin with.

What do you guys think about this Hilary Duff/Mike Comrie reconciliation? Long time coming, or an unexpected surprise? Let us know your thoughts in the comments below.