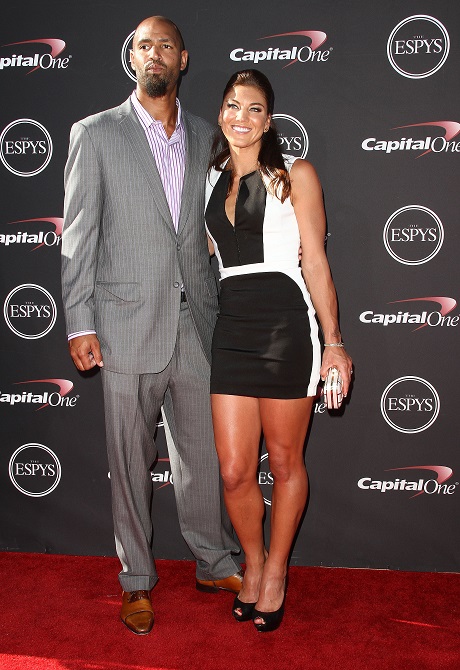 U.S. women’s soccer team goalkeeper Hope Solo’s recent arrest may have been surprising to some, but not those who know her and her troubled life. What else could we expect from a women who claims she was conceived during a conjugal visit between her mother and jailed father, and who married her husband the night of his arrest for domestic violence against her?

Her husband, former NFL tight end Jerramy Stevens, is no stranger to trouble, as he’s had his own fair share of numerous arrests and legal problems, with a history of violence that officially dates back to his high school days. He’s been accused of rape and has been arrested for multiple DUIs and traffic violations. In 2012, after an early morning blowup fight with Hope Solo and her brother, officers found probable cause to arrest Stevens, despite Hope’s claims that the altercation was the result of an attack by three unknown men. It was that night that Solo married her alleged abuser.

Solo seems to always come to the defense of the men in her life. She continually portrayed her father, who has been arrested for kidnapping her and her younger brother, as loving, even saying in her autobiography, “He showered me with love; he just didn’t know how to be a husband or a father or a responsible member of society.” She writes, “No matter what he did, he was my father. He helped create the person I am.”

Shortly before her husband allegedly abused her in November 2012, she claimed she was pushed and slapped by her Dancing with the Stars partner Maksim Chmerkovskiy, who denies the allegations. She did not defend or lie for him, however, and went on the attack in the media and in her autobiography where she details the abuse she endured at the hands of her dancing partner.

Apparently, Hope did not initially publicize what happened and fans demanded she speak up. Ironically, only months before her husband’s arrest for abusing her, she told Newsweek about her allegations against Chmerkovskiy, “The public was like, ‘how can you not stand up for women, for abused women?’ And I was like, ‘whoa whoa. I will always stand up for them’.”

Now, Solo is on the other side of domestic violence, as she is accused of, and arrested on suspicion of, domestic violence against her half-sister and nephew. Oddly enough (well, not really), her husband’s name is involved as well.

The Washington Post reports that Solo was visiting with her sister and nephew when she became increasingly angry after an earlier argument with her husband, who refused to take her to the airport. Couple that anger with alcohol and soon you have Solo calling her 17-year-old nephew “too fat and overweight and crazy to be an athlete” and becoming so out of control that she was described in the 911 call as being psychotic.

It was also reported that Solo had been estranged from her sister and her family because, as the nephew told officers, “she always does this.” The teen claims that after he responded with a few unkind words after her verbal attack, she became aggressive and violent. The Washington Post states that even after Solo’s sister got her to leave the home, she circled outside and finally came around the back and hopped a fence and reentered through a sliding door. There goes any self-defense claim she thought she may have been able to use.

Her lawyer asserts her innocence, telling the Times and Associated Press that “Hope is not guilty of any crime. In fact, our investigation reveals that Hope was assaulted and injured during this unfortunate incident. We look forward to the opportunity to present the true facts in court and to having this matter behind Hope very soon.” Though her lawyer may try to spin the incident by claiming she was hurt, any injuries Solo sustained were likely from her nephew, as the court records show he tried to defend his mom by hitting Solo with a broomstick after Solo attacked her.

I think it is safe to say that regardless of what happens in this case, this is likely not the last time we’ll see headlines with Solo and/or her husband in trouble with the law again. These two have a history of violence and alcohol abuse which, as we know, is often a lethal combination.

Tell us what you think of Solo’s recent arrest!