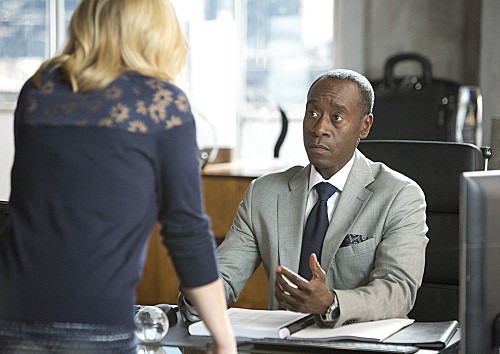 Tonight on Showtime another great episode of HOUSE OF LIES will debut. In “Zhang” Marty’s team is taken on a tour around the area where their client crew up, a trip which ends in a shocking revelation. Meanwhile Roscoe has trouble in his relationship and Monica starts a new business venture. Did you catch last week’s episode? If not we recapped it right here for you in detail so catching up isn’t a problem!

On last week’s episode Marty and the team executed a plan to seize Marissa’s company from her siblings; Jeannie urged Marty to forgive Clyde; Doug and Sarah’s relationship was tested.

If you have never watched the show it is about charming, fast talking Marty Kaan and his crack team of management consultants know how to play the corporate game better than anyone, by using every dirty trick in the book to woo powerful CEOs and close huge deals.

In the board rooms, barrooms and bedrooms of the power elite, corruption is business as usual and everyone’s out for themselves first. Nothing is sacred in this scathing, irreverent satire of corporate America today. Outrageous, subversive and wildly funny, HOUSE OF LIES stars Academy Award nominee Don Cheadle and Kristen Bell.

Tune in to Showtime at 10PM EST for this great episode and we’ll be live recapping it for you right here as well. The cast of HOUSE OF LIES is fantastic, what are your thoughts on the show so far this season? Tell us in the comments below!

The episode starts off with Marty and the pod fighting with a camera man to turn the camera off. Lukas of DollaHyde tells them to keep rolling because this makes for great television. It appears they are showing us the ending first, so we will piece together what happened as we go along. The episode then shifts to fifteen hours earlier where DollaHyde’s other partner Dre is looking to find someone to give him a loan for his company so he can get Lukas out of the picture. Marty doesn’t know anyone who would lend them the money because Lukas is such a liability. Dre then says that he knows a guy named Zhang in China who would possibly lend them the money. Marty and he then continue to hit golf balls at the golf range. The episode then shifts to Roscoe who is being dropped off at school by Jeremiah and his girlfriend Chantal. When at school Lex comes up to Roscoe and they are chatting. Coltrane then comes up to Roscoe and invites him to a crumping dance-off in a parking lot later that night. Lex immediately disses the idea even though it seemed that Roscoe was interested. All of this was done in front of Jeremiah’s face who sees that Roscoe really wants to go and who sees how much of a jerk Lex is.

Meanwhile back at the office, Monica, Marty’s ex, is there. She is there to have a meeting with Marty and the gang but Marty is not there. Caitlynn a junior analyst tries to talk to her and go over some stuff with her, but Monica is not having it. Partly because she values Marty’s opinion more, and because she has been burned by junior analysts in the past. When Marty arrives, they all head to the meeting room where Monica pitches her new protein supplement company Won (Wholesome Organic Nutrition). She talks about the product and Marty and the pod see nothing unique or interesting about the product. Until she shows them the numbers that show that millennial are buying an exorbitant amount of the product. This has everyone interested because typically this group is not a large percentage of the buying market. Doug takes the product back with him to talk to Clyde. Clyde does not really want to talk about Monica though and starts discussing his girlfriend much to Doug’s chagrin. Doug then starts to reminisce about the old times and starts doing this bit called Rum Tum Tugger which was based off of Mick Jagger. Lukas then shows up, and sees this display, which causes Doug to be embarrassed. They then take Lukas to meet Marty and Jeannie where Lukas says he knows about Dre and Zhang and wants the team to come see where the company started in Compton.

Marty and the team show up in Compton when a Mercedes van shows up. It is Lukas who ushers them inside the vehicle and takes them around to see different areas of Compton. He takes them to the original DollaHyde manufacturing plant. He laments that Dre closed this down and moved all of the manufacturing to China because it was cheaper. Lukas still leaves it open and pays the people money, though, which the team knows is a big money suck on the company. Meanwhile back at the office Monica and the junior analysts are talking. Monica says that she doesn’t want any corporate bullshit, she just wants ideas and results. Back in Compton, Lukas shows them the barbeque place Bludsoos where him and Dre came up with the idea for DollaHyde. He also shows them a corner where his friend got shot right behind his and Dre’s back. The whole team is becoming contemplative of how easy they have had it at this point.

Lukas then brings them to a whole-in-the-wall restaurant called Ron Jon’s Lounge where he and Dre used to run their business back in the day. After this Marty and the pod call him on all of this bullshit and ask him what was the play; meaning, what was the real reason he brought them out here to see all of this. Lukas then takes them to the back where they are sure to find out something interesting. Meanwhile Lex and Roscoe are back at Marty’s house playing games. Roscoe really wants to go to the crumping event, but Lex is really rude and dismissive of the whole thing. Jeremiah sees this and is angered. He then forces Roscoe and Lex to get into his car where he took them to the crumping event. At the event, they are enjoying the event when Lex decides to embarrass Roscoe by telling everyone he wanted to dance. Roscoe did not really want to get involved he just wanted to watch. He storms away and gets an Uber car to take him home. Meanwhile back in Compton, Lukas takes them to the back room where Dre is. He is talking to a guy who is obviously not Zhang from the hood. Marty is pissed because there is no way they are ever going to get a loan or make it to an IPO now. Jeannie then tries to get Lukas and Dre to realize that they need to work this stuff out in order to make the company a success. After all of this is ended, Marty and the pod are really spent and are tired of the cameras being on them. This is when the fight happens to get the cameras to turn off.

When Marty is back at his house, he sees Jeremiah’s girlfriend Chantal sitting there. She is chatting with him about his day and about Roscoe and Lex. Marty is clearly not happy about Roscoe and Lex. When the door opens and Roscoe enters the room he is crying and he hugs his dad. This is how the episode ends with Roscoe and Marty hugging it out.