Ian Somerhalder, Nina Dobrev Getting Too Close on The Vampire Diaires: Nikki Reed Jealous and Insecure of Elena and Damon – Adopts Kitten 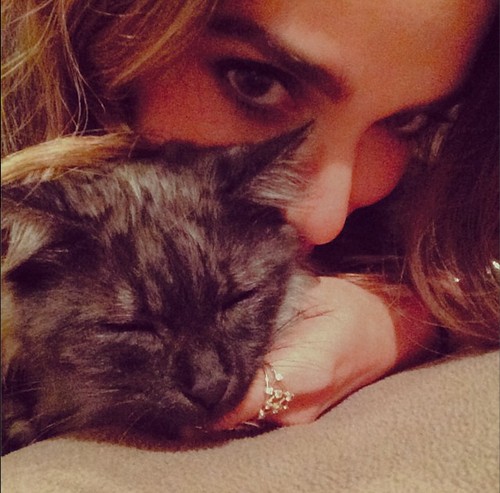 Are Ian Somerhalder and Nina Dobrev getting close again? The Vampire Diares couple of Damon and Elena might reunite later in season 6 and Nikki Reed is feeling jealous and insecure. Is that why Ian and Nikki adopted a kitten? Is this supposed to make Ian’s girlfriend less insecure? Note to Nikki: Nina also adopted pets with Ian and check how that turned out!

Nikki Reed, Ian Somerhalder, and Nina Dobrev are involved in one of the most twisted love triangles in Hollywood right now, even if most of what is written about them is fan fiction. What we know is that Nina and Ian used to date, but are forced to play love interests on The Vampire Diaries even after their relationship ended. While that’s awkward enough, Ian is now dating Nikki Reed, and takes every opportunity to show off his new girlfriend.

Now, the writers of the show have been extremely accommodating and have gone out of their way to limit the romantic interactions between Ian and Nina on the show. That does not mean that they don’t have to act together, just that they don’t have to act together as much as they would normally do on a given season. Of course, ‘Delena’ shippers have to suffer in silence while their favorite couple gets a time-out, even though it’s well woven into the plot line for Season 6.

But even with all this being said, our sources are telling that us that Nikki Reed still feels jealous about the Ian Somerhalder/Nina Dobrev relationship. See, Nina Dobrev and Ian Somerhalder dated for a very long time, and that’s bound to make it awkward for Nikki considering she just started dating Ian. Plus, we don’t want to say how it happens, but we’re hearing that Nina’s Elena Gilbert and Ian’s Damon Salvatore will reunite later this season, which would explain why Nikki feels jealous and  insecure. After all, who wants to see their boyfriend make out with his ex-girlfriend? Man, I don’t know how actors do it, I really don’t.