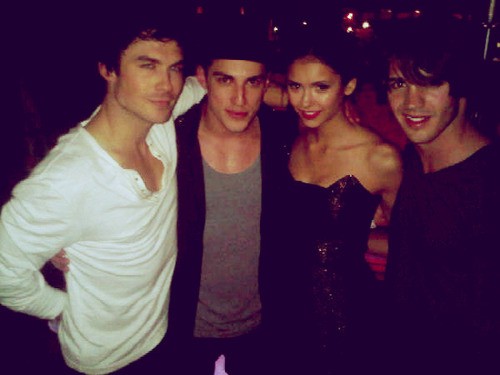 Ian Somerhalder and Nina Dobrev may be trying to give their romance another try, but according to reports, it’s not going so well. The two have had their ups and downs, but for all intents and purposes, they were ready to give their commitment another try before they ran into a little snag.

Apparently, Nina is still not convinced that she’s ready to settle down with Ian, whereas he’s full steam ahead on the marriage and babies plan. Of course, Ian’s 35 years old and starting a family is probably at the forefront of his mind, especially since his career isn’t really on fire right now. Nina, on the other hand, is 25 years old and still has her entire future ahead of her. Can we blame her for being skittish when it comes to the idea of settling down forever?

Plus, it’s not like Nina and Ian haven’t given this whole romance thing a try already. They went out for a few years and eventually ended up breaking things off, and still managed to remain on amicable terms. If they get back together and things go awry again, then they’ll be stuck with each other until they’re done with their Vampire Diaries contracts, which will just make it awkward for everyone involved in filming the show.

Either way, Ian’s reportedly convinced Nina to give their relationship another try, even though she still wanted to continue playing the field and keep things casual. On the one hand, I can’t help but feel like Ian’s projecting his own ideas and goals onto her, and why that could have been one of the reasons they initially broke up. Nina’s probably not ready to jump back into another serious relationship, especially since Ian clearly wants more than she’s willing to provide right now. And if she’s having so many second thoughts about their reconciliation, should she even stay with him?