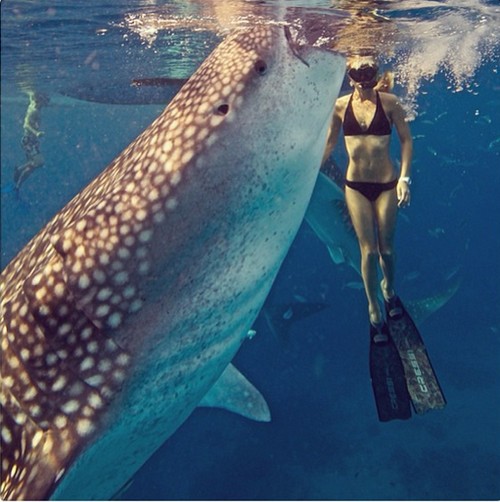 After almost a year of waiting, Ian Somerhalder has finally decided to move on from Nina Dobrev. Sure, they dated for a few years and yes, he was reportedly interested in getting back together with her. He even waited to date anyone else, hoping that Nina would be interested in a reconciliation. However, it’s now been more than a year and Nina’s showing no signs of coming back to him. In fact, she’s already had several rebound relationships, which shows that she’s more interested in playing the field than she is starting a relationship with Ian again. Even worse, lately Nina’s been dating Michael Trevino, despite both their lame attempts to deny it.

So, obviously, any guy’s pride can only take so much, right? Ian waited and waited, and now, he’s tired of waiting. But it looks like he’s finally found his perfect wife, albeit in a Twitter jest. Ian tweeted a link to an article about Ocean Ramsey, a beautiful ocean conservationist. Ian does a lot of environmental work, and obviously he would be drawn to someone with similar interests. Plus, it probably doesn’t hurt that Ocean also has the looks of a movie star. And let’s not forget that Nina’s interests in no way overlap Ian’s – in fact Nina even smokes cigarettes!

Along with a link to the article, he tweeted, “Umm, is she married??? Does she want to be???” Clearly, someone’s got a little crush. And once Ocean finds out that Ian’s interested, even via Twitter, she’ll probably find it hard to resist his charms. After all, they’re both good-looking folks who just happen to have the same passions. What’s not to love? Plus, Ian could do a lot, lot worse with a potential girlfriend.

What do you guys think? Will Ian finally move on from Nina, and with Ocean Ramsey? Let us know your thoughts in the comments below.