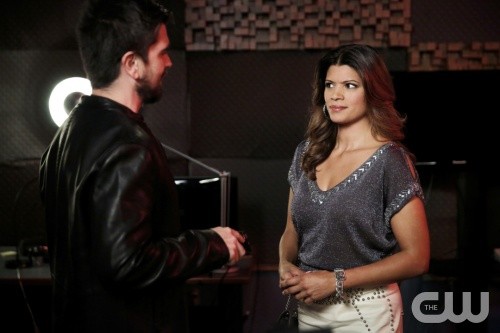 Jane the Virgin returns tonight on the CW with an all new Monday December 8, season 1 episode 8 called “Chapter Eight,” and we have your weekly recap below. Tonight, a music producer contacts Xo about recording a demo, but Xo’s unaware that Rogelio [Jaime Camil] is behind this. Meanwhile, Jane [Gina Rodriguez] and Rafael [Justin Baldoni] share surprising secrets with one another; Michael comes close to solving his case; and Petra won’t make things easy for Rafael.

On last week’s episode, Jane (Gina Rodriguez) decided the best thing for her was to stay away from Rafael (Justin Baldoni), but when her friends insisted on taking her to the hot new club that he owned, she found it hard to avoid him. Elsewhere, Xo (Andrea Navedo) and Rogelio (Jaime Camil) each had dinner plans, so Rogelio suggested they have a double date, but the evening didn’t work out as planned. Meanwhile, Petra (Yael Grobglas) was once again scheming to make Rafael’s life more difficult. Brett Dier and Ivonne Coll also star. Did you watch the last episode? If you missed it, we have a full and detailed recap right here for you.

On tonight’s episode as per the CW synopsis, “Jane (Gina Rodriguez) and Rafael (Justin Baldoni) both reveal shocking secrets to each other. Xo (Andrea Navedo) is excited when a music producer, Elliot (Juanes), contacts her to record a demo, but little does she know that Rogelio (Jaime Camil) had a hand in making it happen. Meanwhile, Michael (Brett Dier) is close to a big break in his case, and Petra (Yael Grobglas) finds new was to make Rafael’s life difficult. Ivonne Coll also stars. Norman Buckley directed the episode written by Josh Reims and Carolina.”

Don’t forget to come back here tonight at 9 PM EST for your live recap of Jane the Virgin season 1 episode 8. In the meantime, be sure to hit up the comments section below and let us know what you’re most excited about for tonight’s new show.

“Jane the Virgin” returns tonight to answer the long awaited question of why exactly Rafael had to go to Mexico. And it seems like his sister could be at fault.

Rafael had put up his own shares in the hotel as collateral for his sister’s practice and because of her great big blunder (unlawfully impregnating Jane) – he’s stake in the hotel is at risk. Earlier, Jane had decided to sue Luisa but at the time she hadn’t known about Rafael. And seeing as Rafael has no plans to inform her about how her decision will affect him – she’s still suing Luisa and unfortunately Luisa has in turn done a runner.

If Luisa doesn’t return to fight the court case then Jane can win by default. Which is a good thing – for Jane. Though not for anyone else. Most especially Rafael. Rafael’s father won’t forgive him for losing those shares and Petra is just waiting for her ex to screw up even more so she can get as much money as she can. Either from him or her partner in Rafael’s downfall.

Thankfully, Luisa returned before she could lose the case. But her time in Mexico has changed her. And not for the better. You see Luisa now believes money is the root of all her troubles. So she’s perfectly ok with the judge taking whatever the other woman deems fit.

Hence it’s a good thing Luisa wasn’t representing herself in court and has a fully qualified lawyer prepared to argue for her while she works off whats in her system.

Prior to Luisa’s return, Rafael’s father had removed him from his position at the hotel. Rafael was no longer allowed nor even trusted to run the place in his father’s absence. So that position was handed over to Lachlan. And we can all recall, Lachlan hates Rafael.

So after Rafael convinced his father to let him work at the hotel again – Mr. Solano gave him conditions. As long as he could answered directly to Lachlan then Rafael has a position. But Lachlan wanted to screw with Rafael so he told the other man he would have to answer to Petra.

Lachlan is giving the running of the hotel to Petra and because that was going just too far for him – Rafael turned down their offer.

Rafael and Petra had exchanged some words and the end result wasn’t pretty. She told him that he couldn’t be trusted and that he would ultimately hurt Jane. And then Rafael made a mistake. He got super protective about Jane and that showed Petra where she could strike at him next.

Later Rafael and Jane finally had that all important discussion. She told him she was a virgin and he had needed time to adjust. And, technically, he had ended up needing a lot more time than Michael had. So of course Jane couldn’t help making a comparison.

Jane was upset with him (because he wasn’t acting like Michael) and Rafael chose to have a drink (because that’s how he handle things). He probably should have turned down that drink, but he hadn’t. So then he ran into a young attractive woman at the bar and by the next morning Jane had walked in on them after Rafael’s date had ordered room service.

The woman Rafael was in bed with was actually an escort and get this the woman also happens to be a religious escort. When she realized she had betrayed Jane the Virgin, the woman came clean. She confessed to Jane that she had been paid to set up Rafael. And Jane gave her peace of mind by forgiving her. Though she wasn’t so forgiving toward Rafael.

Rafael still was the guy that couldn’t handle hearing she was a virgin so Jane told him that maybe they should focus more on their child and less on their relationship.

And things just kept doing downhill from there for Rafael. Once he had cleared things up with Jane, he then had to deal with Luisa’s apparent breakdown. When Luisa had come back, she had told her stepmother/lover that she was going to come clean with her father. And because Rose didn’t want to get a divorce from her very rich husband – she told Luisa’s family that Luisa has been making inappropriate gestures towards her.

Well, one thing led to another and suddenly Mr. Solano was agreeing to have his daughter hospitalized. Apparently, Luisa’s mother was emotionally unstable and that’s why it was so easy for Solano to believe his daughter might have inherited some of his former wife’s traits

Good news for Rose but now Luisa is screwed. No one is going to believe her and her usual number one defender – her brother – is also on Rose’s side. Not that he would have paid enough attention to even be of help.

Rafael has chosen to stay on at the hotel and work for Petra and Lachlan. He wants to show Jane that he is capable of fighting for what he wants. But Xo, Jane’s mother, isn’t happy about him being involved in her daughter’s life.

Xo just made her first record thank to Rogelio but her duties as mother comes first. And Xo doesn’t think a man like Rafael can make her daughter happy.