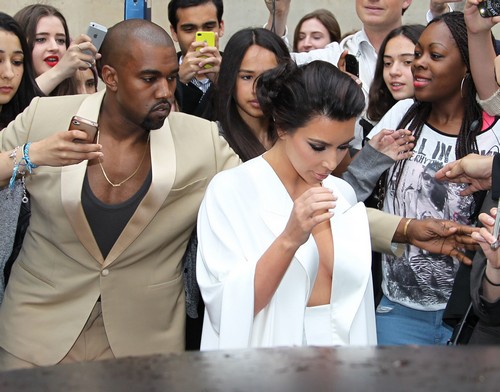 Kim Kardashian and Kanye West are involved in their wedding spectacle in Versailles and Florence while best man Jay-Z is mocking the couple behind their backs. Even though Jay-Z is standing up for West in his marriage it’s a bit of a joke to the rap superstar.

“Jay thinks the entire wedding is a joke and it’s being blown way out of proportion,” an insider told RadarOnline. When Jay-Z was asked about the wedding he just laughed and said, “The circus goes to Paris!”

Jay-Z agreed to be West’s best man and even sent him a surprise gift. “The best news came when Jay sent a gift to Kanye with an inscription referring to Jay Z as the rapper’s ‘Best Man.’ The gift was a gold-plated, diamond-encrusted flask, delivered with a $10,000 bottle of scotch, for Kanye to have for his wedding day,” the insider previously told Radar.

Jay-Z was rumored to be shying away from attending however will now make an appearance after Kim and Kanye banned cameras for the Kardashians’ E! reality show at the wedding. Mind you that is hard to believe since TMZ already is posting photos of the wedding events. No wonder Beyonce doesn’t want to be there – not only does she hate Jay-Z but she hates Kim even worse!

But according to the source, Jay just stays cool with Kanye because of their working relationship and doesn’t really count him as one of his best friends.

Kim and Kanye have been working hard at not revealing too much information for the wedding. Reportedly, guests have been kept in the dark about certain details, and no one is allowed to use their cellphones during the event. Kim and Kanye and their wonderful reality show, KUWTK, need to keep everything under wraps so they can maximize their incomes. This isn’t a wedding, it’s another sex tape just minus the sex and minus Ray J.