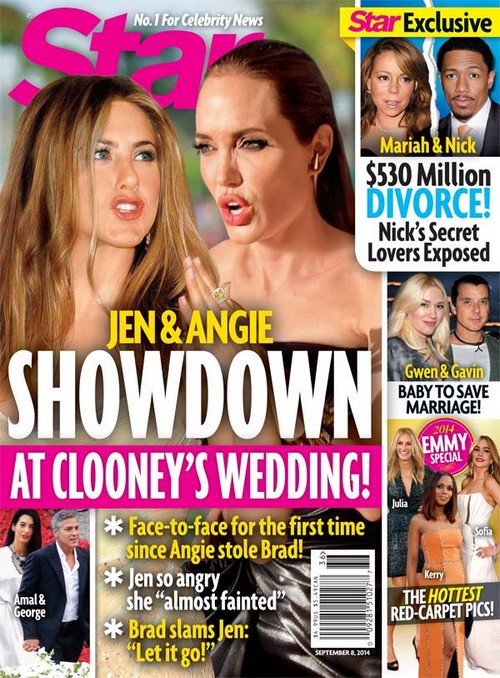 Fans of Jennifer Aniston have been waiting for years for the actress to finally come face to face with Angelina Jolie. Instead the actress has gone to great lengths to avoid running into the woman that basically stole her then-husband, Brad Pitt away. 9 years of running in the same Hollywood circles but avoiding each other is pretty amazing and from the sounds of things it’s about to come to an end. Do you think that Angie and Jen can face each other without it turning into a physical altercation?

According to the Sept. 8th print edition of Star Magazine when George Clooney ties the knot with Amal Alamuddin look for both Angelina Jolie and Jennifer Aniston to be in attendance. The ladies both befriended Clooney because of his friendship with Brad and neither one intends to miss out on his big day but how will they react when they are actually in the same place? When Jen learned of a potential run-in her anger supposedly flared and who can blame her? Imagine never confronting a clear cut enemy and then realizing you could really have an opportunity soon. I’m sure it’s dredging up all sorts of emotions for Jen, don’t you think? Could there be an angry confrontation between the two on the horizon?

Something else that is getting messy is Mariah Carey’s impending divorce from Nick Cannon. The duo have pretty much confirmed that the marriage is over but there is a lot at stake- like $530 million! Even more importantly the two are expected to battle for custody of their twins. Mariah currently has the kids but Nick is rumored to be concerned about how her chaotic lifestyle disrupts their schedules.

Are Gwen Stefani and Gavin Rossdale on the rocks again? According to the Sept. 8th print edition of Star Magazine she is contemplating having another baby in an attempt to save their marriage? How old is their youngest son- maybe 6 months? Gwen knows better then to resort to having a band aid baby doesn’t she? Tell us your thoughts in the comments below!

Update: now that Angelina Jolie and Brad Pitt have gotten married in France this past weekend one can only imagine the bitterness Jennifer Aniston feels. I doubt that she will have the gumption to even attend Clooney’s wedding with her bought and paid for fiance Justin Theroux.