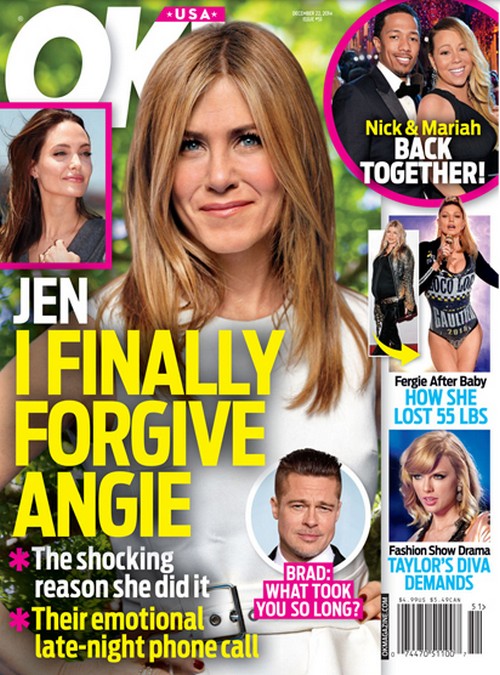 Jennifer Aniston is featured on the latest cover of “OK!” magazine and for this week’s gossip, she has apparently forgiven her former love rival, Angelina Jolie. For this week’s issue, we go way back in the past with our time machine to 2005. Forgiveness comes easy to Jen after Angie’s recent humiliation. Angie’s directorial ‘masterpiece,’ “Unbroken,” was snubbed by both SAG and Golden Globes award nomination ceremonies while Jen scored at both. Additionally, Angelina Jolie was called “a spoiled talentless brat” in leaked Sony email exchanges between Hollywood powers that be. In fact Angie was laid so low by her public humiliation and Jennifer Aniston’s success that she went and got chicken pox!

In 2005, Brad Pitt and Angelina Jolie filmed their movie “Mr. & Mrs. Smith.” During the filming, they claimed to have fallen in love with one another, despite many claims by Jolie that she would not hook up with a man who cheated on his wife. Jen and Brad divorced that very same year and in 2006, Jolie was pregnant with their first biological child, Shiloh.

Now that we’ve had our little history lesson, here’s the scoop on Jen. She has banged a multitude of men since Angelina stole Brad away. She has hooked up with (in no particular order): John Mayer, Vince Vaughn, Paul Sculfor and was rumored to have made sexy times with Orlando Bloom and Owen Wilson (separately, natch) and is now engaged to Justin Theroux.

So after having sex with roughly six men, she is supposed to be still pining over the likes of Brad Pitt? Does this nonsense have an expiration date? The gossip rags have been claiming that Jennifer is this poor, saddened mess that has been holing up away in tears for a decade over Brad Pitt. Does he have a magical penis that whatever it touches turns to gold?

According to the magazine, “Jen called Angelina after she got her number from a personal friend. Jen knew if she wanted to put the past behind her, she needed to have a talk with Angie to let her know she’d forgiven her. Once Jen said she was calling for closure. Angie said that she was glad to hear from her. In an attempt to relieve the tension, Jen joked that she hopes Angie’s marriage to Brad last longer than hers did.”

Jennifer Aniston has moved on a long time ago, case closed. Seriously. Was Brad Pitt that good in the sack?