Jennifer Aniston and Miley Cyrus Fight: A Man Comes Between Them? (PHOTO) 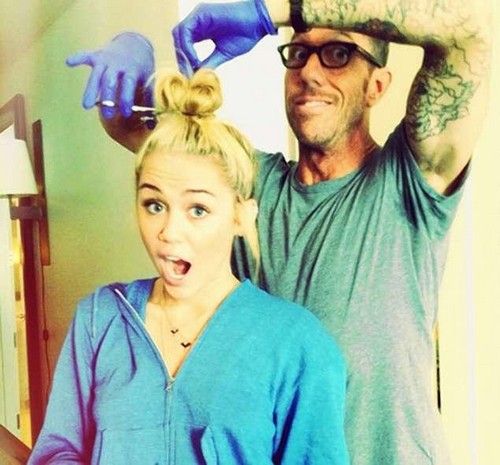 Jennifer Aniston wants Miley Cyrus’s hands off her man, her “mane” man that is. Aniston is allegedly ready to take the scissors and trim the relationship that has grown between her longtime hairstylist Chris McMillan and twerk star Miley Cyrus, as her hair and image are suffering as a result of it. McMillan, who was once known for creating “The Rachel” hairdo Aniston rocked on the hit 1990’s sitcom Friends, is now famous for Cyrus’s pixie hair cut and edgy new rock image. Word around town is Aniston wants to put an end to all that, so her and McMillan can get that old thing back.

While it is not clear as to how much time McMillan currently spends on each respective celebrity starlet’s tresses, it seems definite that Aniston may feel she needs more time. Aniston reportedly has at least three big movie projects coming up in 2014, and wants McMillan to “re-focus” on her image in preparation for she feels will be a come back year. Perhaps Aniston feels like McMillan does not have enough time to devote to her look, because he has been recently spending it posing with hot young Miley Cyrus for Cosmopolitan.

Though if the reports going around town (RadarOnline) about Aniston “fuming” and ready to give “ultimatums” to McMillan are true, it makes you wonder: how much time does a stylist actually need to devote to a client to create the perfect look? With time being abundantly available to anyone walking in the land of the living, it would seem that McMillan could cater not only to Aniston and Cyrus, but other clients as well! McMillan does have a Beverly Hills salon, which he advertises through Twitter and Instagram so clearly he has a clientele that extends well beyond Aniston and Cyrus. It seems ridiculous to think the former Friends star would be so possessive over her hairdresser’s personal and professional time. Not to mention, she was away on vacay with some of her famous friends for the last few days of 2013 in Cabo San Lucas, so one wonders whether Aniston wished McMillan to stand idle waiting for her return? What are her expectations here? If Aniston requires round the clock attention, why doesn’t she pay McMillan enough to be her exclusive stylist?

Aniston’s fiancé Justin Theroux better take note, as it seems a good hairdresser may be harder to find than a good man. Time will reveal how far Aniston is willing to go to keep either of her two main men.