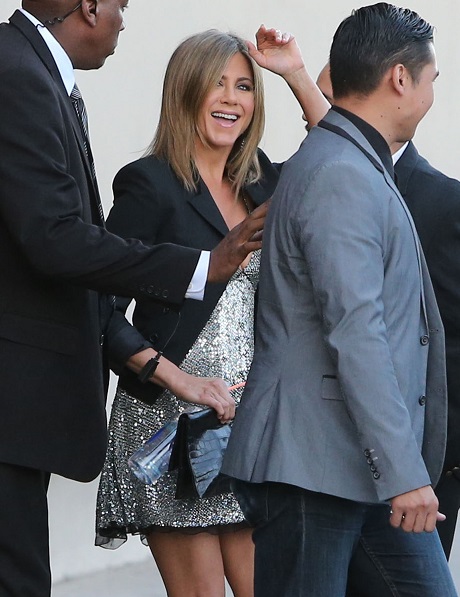 Jennifer Aniston began these recent days thinking that the news would be all about her. After all, she’s been promoting her new movie (Life Of Crime) pretty diligently, hosting a mini-Friends reunion on Jimmy Kimmel Live, showing up to premieres in sparkling mini-dresses, discussing her ‘pregnancy’, and basically going all out to get people talking. But Angelina Jolie and Brad Pitt sneak-attacked with their wedding announcement recently. Suddenly, people could care less about Jennifer and her “billionth” pregnancy. They don’t care that Friends had a mini-reunion. They just don’t care, period.

Obviously, the media is already turning this into an intentional move on Brad and Angelina’s part, an attempt to “bash” Jennifer, but I doubt that that was their intention. They went public with the news relatively soon after getting hitched so that somebody else didn’t leak it for them first. To them it’s like, Jennifer Aniston who?

Trust me, the only reason they event went public with the announcement is that it coincided perfectly with Brad’s promotional appearance for Fury, where he was recently photographed sporting his wedding ring for the first time in public. You think that’s a coincidence? Please, this is Brad Pitt and Angelina Jolie we’re talking about. They are master media manipulators, and they’ve just given a master class in using the media to their own benefit.

They managed to control the message, and now, they’ve got the perfect recipe for Oscar success. It would be a one-two punch if Brad managed to get nominated for Fury, and if Angelina got nominated for Unbroken. And, meanwhile, Jennifer is left with no nominations, no Oscar buzz, and nobody caring about her ‘wedding’ to Justin Theroux.