Jeremy Meeks Hot Felon Enchants The World – Top Modeling Company To Shell Out The Cash For His Bail? 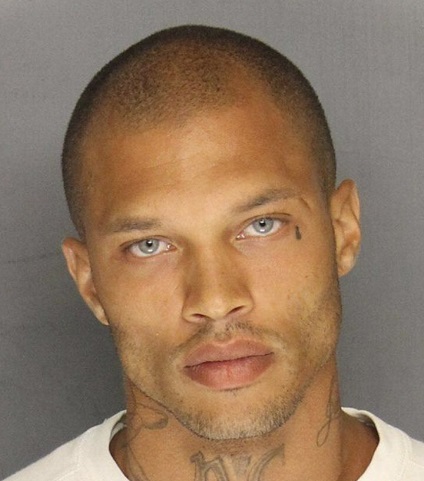 America’s Next Top Felon Model was taken into custody during “Operation Ceasefire” – a melodramatic mission to “curb a recent increase in shootings and robberies in the Weston Ranch area of Stockton, a Northern California city of about 300,000.”

His bail was set at $900,000 (yes, $900,000), which means Meeks will remain in prison for a very long time. He needs to win Who Wants To Be A Criminal Millionaire to free his fancy face. The prison version is bit more difficult though — ask the audience and die.
Fortunately, Meeks has a special lifeline called “advertising.”

According to TMZ, Meeks was approached by a tattoo removal company that’s offering laser treatments for “free.” LaserAway (so original…) will pay him $20,000 to erase his tattooed past. This bizarre, inexpensive, and exploitative advertising campaign is just one of several lucrative offers. Modeling companies are also interested in using Meeks’ sudden fame to their advantage. They like his body art and bad boy image, but we highly doubt that a modeling company would shell out $900,000 to make him a supermodel.
It would be a terrible investment.

Celebrity offers aside, Meeks’ story is at its core a tragic consequence of superficial obsession. A 20 – 30 year sentence is much longer than 15 minutes. What do you think about Jeremy Meeks? Does he tickle your bad boy fancy? Is he just another internet celebrity? Let us know your thoughts in the comments below.