Johnny Depp, Vanessa Paradis Getting Back Together After Amber Heard Cheating Rumors With Channing Tatum? (PHOTOS) 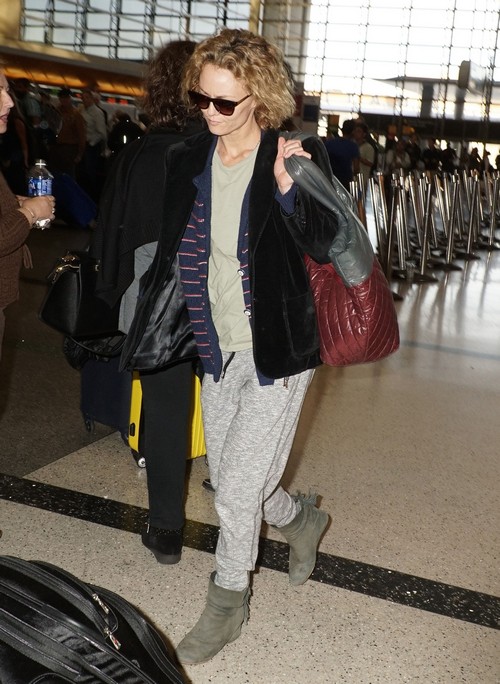 Vanessa Paradis and her famous ex-hubby Johnny Depp are getting back together and reconciling, Vanessa just arrived in LA to try and pick up the pieces of Johnny’s shattered heart and ego. The month of November has not been too kind to Johnny Depp. First news broke that his girlfriend Amber Heard, who is half his age was on the prowl for a hotter, younger model. Sources revealed that Amber and Channing Tatum were getting a little too close on the set of Magic Mike XXL and shamelessly flirting with Tatum in front of everyone.

So, what is one to do when reports hit the internet that your girlfriend is cheating on you with Channing Tatum? Well, if you are Johnny Depp then you go on a wild drinking binge and publicly embarrass yourself on television. Depp took the stage at the Hollywood Film Awards, emulating his character Pirates of the Caribbean character Jack Sparrow, and slurring and stumbling like a drunken pirate. The crew at the awards ceremony was forced to play a media package during his speech because it was riddled with strings of profanity that didn’t even make sense.

Vanessa Paradis might just be the most understanding ex-wife ever, despite the fact that Depp dumped her for Amber Heard, she has always stood by her man. Paradis has watched and waited from afar for the inevitable day that we all knew was coming, the day when Amber grew bored with her fiancé old enough to be her father and kicked him to the curb. And, just like we all predicted, Vanessa is swooping in to comfort Johnny and hold his hand through his and Amber’s messy break-up.

Vanessa Paradis was photographed flying in to LAX airport in Los Angeles on November 17th. Vanessa, the mother of Johnny’s daughter Lily-Rose, who is currently working on a Kevin Smith movie, has clearly never gotten over Johnny. And, considering he is a drunk and heart-broken mess – now is the perfect time for her to get her man back.

Do you think that Johnny Depp and Amber Heard are officially over, or is there a chance they might work this out? Does Johnny belong with Amber Heard or Vanessa Paradis? After everything Johnny has done, is Vanessa crazy for flying to LA to support him? Let us know what you think in the comments below!